Another freezing cold start to the day; the kind where your fingers sting so much, despite the gloves, that you really could be excused for being a big baby. I took off my gloves to take a photo of a beautiful pink sky (I think that you can just about get the atmosphere in the photo) which made them sting again for about 10 minutes...boo hoo. 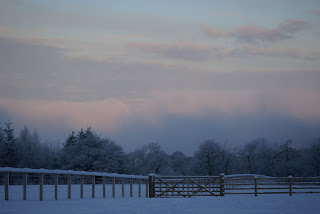 To make matters worse I couldn't find my favourite bobble hat...the warm one...the one that keeps your ears covered as well as your  head. The reason for this misplacement I discovered... was because Paul had got to it first...he soon whipped it off when he thought that he was going to get caught on camera wearing a girl's pom pom hat I can tell you! Although, he did get called out to a job soon after, so got to enjoy the warmth of his car and kindly left me the hat. 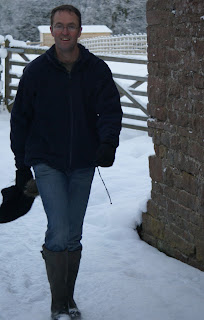 I forgot to mention that we got the results back from the VLA for Lady G. She got the all clear with only a small worm count (<20) and was negative for all the nasties. Always reassuring to know. As they have now settled in the girls got their injections of Cydectin 2% and Frontline treatment today. They do seem to have settled well...I think that they have cottoned on that the room service ain't bad!
This weekend is supposed to be the girls Xmas sleep-over at Beck Brow...a yearly event consisting of lots of food, copious amounts of wine and very little sleep. It is carefully arranged to coincide with Paul being in London for the weekend, at his annual works AGM and Xmas party. We have been looking forward to it...we have been practicing...the rules are that how ever much is consumed....however late to bed (usually around 5am)...you still have to go walking the next day. Well it's all gone pear shaped, as Paul has decided not to make the unnecessary journey in the snow...If the cat's not away will the mice still get to play?...we are reviewing the situation first thing!
Posted by Unknown at 17:12