It was minus 12 degrees when I got around to checking this morning. The downstairs cloakroom has frozen, despite extra heating all night, so I expect it may have been even colder overnight. At least the sun has come out today and I managed to tempt most of the alpacas outside for some hay...much to Velvet's delight:﻿ 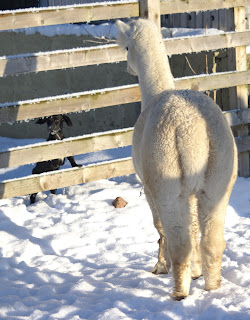 Velvet assessing the situation...is Minnie to be trusted?...going right is looking like the better option. 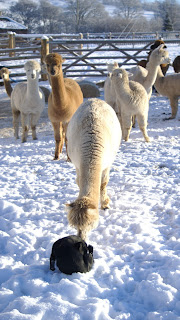 Can a lady not have some privacy and dignity?... 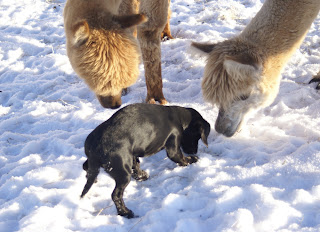 Okay...I'll show you...the grass is under here, you just have to dig a bit (Willow and Nina) 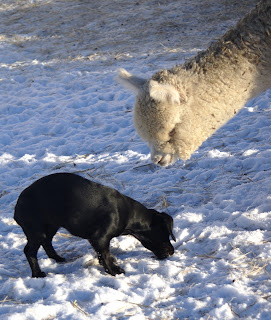 OMG...that's scary...apologies for only getting his neck in the photo, I jumped as well!...click on photo for close up of full horror experience.
I have given up trying to keep the cria fleeces in anything vaguely near pristine condition﻿. Keeping them warm and well fed has to be top priority in these extreme conditions. I know...I said the same thing last year...if it happens every year then can it still be considered extreme? Anyhow they have managed to get themselves looking like haystacks, despite my best sweeping up efforts. The only solution I feel is to cria shear, but with summer births (to avoid the late spring frost we often get) I would have been worried that they wouldn't have had enough fleece for the November frosts...what to do?
Not only a problem for processing, it also means that we probably won't end up with any cria fleeces suitable for showing. Now, this is where I have a proposal to put to BAS...a handicap system...they are already about to alter the BAS fleece scoring system to reduce the emphasis on weight...they could introduce it at the same time: Any cria who has to endure temperature of minus 10 or above automatically gets the full five points for lack of fleece impurities...sounds fair to me!! Explorer...that's hay, straw and poo in there!
I go around thinking such silly thoughts just to break up the drudgery of spending day after day...hour after hour repeating the same jobs, with very little new achieved. Every day I try to change my opinion on which of the jobs I hate most...just to reduce the ground hog feeling...yesterday it was carrying buckets of water (which froze again before ha﻿lf of them were drank...then I feel that it is a complete waste of time). Today it is barrow emptying...I lowered my standards last night and didn't empty the wheelbarrows ready for the morning...yes...you guessed they where frozen solid this morning...aggghhhh
My thought for today: If only I could invent something that stopped the water buckets freezing...that wasn't called anti-freeze...I could be so rich, as well as making so many people happy!
Posted by Unknown at 12:47