Died of a broken heart?

I had hoped after my last blog (about the loss of Legacy) I could return from our holidays with a much happy blog for you...maybe even a bit of humour...I will try my best, but be warned things go very rapidly down hill.

So the cheery bit...the holiday in Mauritius; Having spent lots of time researching the island before booking our holiday, I had high expectations for what we were going to find. After all we have visited a number of places around about...including the Maldives, the Seychelles, Zanzibar, Madagascar and Reunion... In reality, the research amounted to 15 minutes on Trip Advisor and we had no expectations other than to get some sun and a rest...the aforementioned holidays were pre-alpaca-obsession...when holidays were the highlight of our year, and took a good chunk of our hard earned cash too...now everything is evaluated in terms of alpacas..."how much?"..."I could get a top notch female for that"..."two legs of a stud male" ..you get my drift.

Well, as luck would have it; I had booked well...Direct flights with British Airways (that was a bonus don't think I even checked that bit!) and a fabulous hotel (thanks to Trip Advisor) in Belle Mare on the east coast (the most beautiful coast on the island...pure luck...as I thought we were on the west!). Anyway in order to make it as restful as possible; Paul banned me from taking my Blackberry and my iPad...he said that this was so I would rest, but I think he was trying to break my addiction to SongPop (a bit like Name That Tune on the iPad)...he may have had a point...as on the third night I did shout out "Bob Dylan" as I heard the first two beats of a tune...Paul gave me a glare so I shouted " Van Morrison". I was right the first time...I think it was the shouting that was the problem rather than the answer!

So no contact with the outside world other than Paul's well guarded phone...which most of the time was left in the safe in the room. I kept sneaking a look for messages...going back to the room on some pretence or another. Well, by Saturday I decided that actually we were going to have a holiday with no bad news from home...mistake! This was the first mistake even thinking it...the second was suggesting that Paul took his phone with us for lunch, so that we could take some photos (yes, we didn't even take a camera)...I saw Paul glance at his phone...then he looked up and with no softening at all..he blurted out "Poppet is dead"...I thought that it was only in black and white movies that; one took to ones bed upon hearing bad news...but that is what I did.

So, poor Robyn and poor poor Poppet...I cant believe another unavoidable death whilst we were away. After the initial shock of finding Poppet (real name Beck Brow Page Turner) dead in the field at 07.30 am, Robyn managed things very well, immediately getting the vet to do a post mortem whilst blood samples and tissues could still be tested. Apart from the very obvious distress of losing a beautiful maiden (2.5 years old and 9 months pregnant) we were worried for the rest of the herd. Fortunately the post mortem concluded that Poppet was a picture of health...no fluke, no parasites, no disease...but had suffered a fatal myocardial infarction (heart attack). Possibly a severe shock, but most likely either a weakness that had been there from birth and the pregnancy had exacebated it, or a pregnancy related clot.

A tribute to Beck Brow Paige Turner (Poppet) before the next bit of sad news... 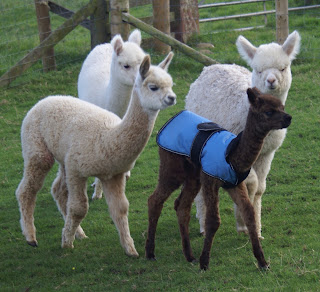 Not only was she the sweetest, calmest alpaca you could ever wish to own...she also had a beautiful fleece...here she is below first placed junior fawn female and Champion Fawn Female at the YAG Show 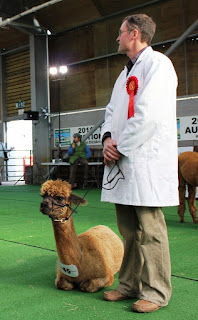 Chilling out as always...the beautiful Poppet in the line up for female fawn champion, which she took. 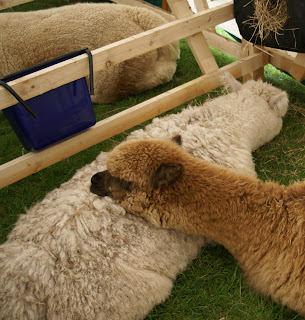 I did say that she was chilled...here she is asleep on Beck Brow Explorer...he still managed to get Supreme Champion despite the sweaty fleece (I was not there!). That is Waradene St Patrick in the next pen...I was so excited at the prospects of their cria together (due April).

Now this it where the blog gets even sadder... if this were possible. Poppet and her dam; Blueberry Samauri Bahati, have always been incredibly close. Bahati (a top class female who was first placed brown female at the National Show at Junior, intermediate and adult ages) has had three other females (Pebbles, Pepsi Lola and Lullaby) but has had always been particulary attached to Poppet.. 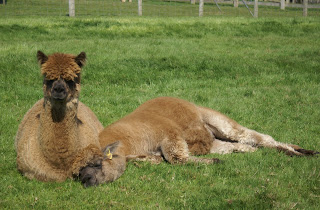 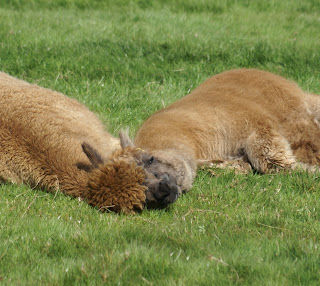 Poppet and Bahati...so alike that they merge as one.

Admittedly Bahati hasn't been quite right for some time...we have had the vet check her over a couple of times but nothing was found...however, she was more difficult to get pregnant this year and we have been feeding her extra rations to keep her weight on. Regular readers may recall that she had a lull in energy at the same time last year and sat around a lot, then picked up come spring. So, we weren't overly concerned and Robyn actually had her checked over when the vet was out with Poppet on Saturday.

Sadly, Bahati appeared to be devestated by Poppet's death and lost her will for life. Monday lunchtime (just as we arrived back from Mauritius) she deteriated rapidly. We had called the females in so we could do a quick check, but she didnt come. As she stood she fell backwards. On closer inspection she was unable to see. We did manage to get her in and called out the vet. She was given; antibiotics (temp slightly up), magnesium (low), calcium, Vit B1 and Vit B 12 and plenty of fluid. But unfortunately she continued to deteriate ﻿and she passed away at 3pm yesterday. My crying was over by then, I knew we had lost her that morning. Bahati was so very special...the first female we bought to be part of our elite herd...but much more importantly she was the most caring and wonderful mother to her daughters.

The older members of the herd have been in mourning...Bonita especially who was humming over the body in distress. Even Velvet the dog has been upset...she sat with Bahati for hours before she passed away...licking her face and trying to get her to get up, then realising this wasn't going to happen she just cuddled in next to her...a tear jerker if ever.

I should get the results of the post mortem today...I am sure it wont say 'died of a broken heart' but that is how it feels.

Right back to a distant memory...here is a photo (a poor quality one on Paul's phone...it was actually bright sunshine not misty) taken from our bedroom...three steps away from the beautiful beach. As I think that this will have to be our last long haul holiday (too stressful for poor Robyn and Craig...and us...to be so far from home) I thought that I should keep a momento. Its snowing here this morning...too late now! 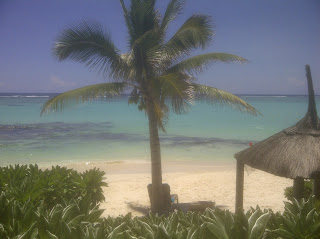 Mauritius
Posted by Unknown at 08:44