I really can't thank everyone enough for all the kind comments, emails and phone calls that we have received about the loss of our two precious girls...it really does help to know that others understand.

Owning alpacas is life changing and is undoubtedly one of the best things that we have done. For us, two of the most important rewards we have had from having alpacas in our lives are:

Before I move on to happier times; preliminary post mortem results for Bahati revealed again a clean bill of health apart from heart failure (and ultimately pulmonary oedema - fluid on her lungs - due to a failing pumping heart). We are still waiting for microbiology and histology results to confirm if this was a primary cause or if it were secondary to an infection or other morphology. I was convinced by her signs and symptoms that she had at least a degree of polioencephalomalacia (thiamine deficiency) but as this was treated with high doses of vitamin B1 we will never know from the blood results. But ending on a positive note we have had Bahati's two other daughters; Pebbles and Pepsi Lola vet checked, and they have no cardiac problems...thank you Bahati, your lovely daughters will carry on your legacy.

Now to much happier news...our new black female. A few blogs ago I mentioned that we had made another purchase: but wanted to wait until she was signed, sealed and delivered before saying too much. Well, I can now reveal that Cambridge Scarborough has joined the Beck Brow herd. Scarborough is an outstanding female who has produced nothing but prize winning progeny to date, including; Nero Black Galaxy (female) and Nero Black Ice (male) who have both won colour championships. She has also produce Nero Black Rose (another prize winning female) and Nero Black Diamond, who will both be shown at the British Alpaca Futurity 2013.

When our good friends Kathryn and Paul Shrimpton from Nero Black Alpacas initially contacted us to tell of us of their decision to release Scarborough for sale, we first of all wanted to ensure that this was a well considered decision on their part (which it was - they have a growing elite prize winning black herd and have limited land available, and as Scarborough is now related to a large percentage of their herd, it was a reluctant but necessary decision) this ascertained we wasted no time in saying YES PLEASE! I have been such a fan of Scarborough and her family, and we are honoured that she has chosen us to be her new owners...thank you Kathryn and Paul.

Yesterday we weaned another group of cria. All six months old but only one over 30kgs (Marco). As with most breeders, we are finding out weaning weights to be much lower this year. In this group were; Dougal (you may remember him as Domingo), Marco, Paulo and Angel (belonging to Robyn and Craig). They do seem to be settling well, but I always find those weaned in to an established weaned group do find it easier.

Apologies for the poor quality photos (the light was wrong!) and for the untrimmed top knots and hence poor visibility (Katie; Synergy and Alfie's new owner, is coming for a husbandry training day today and this is on the agenda). 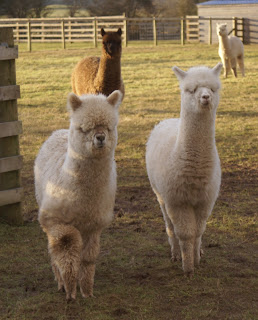 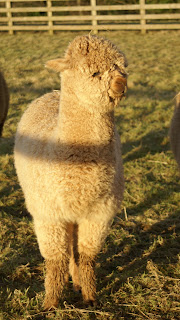 Bendrago...which way to the hairdressers? 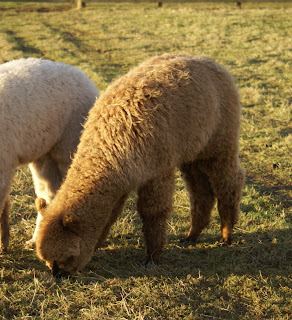 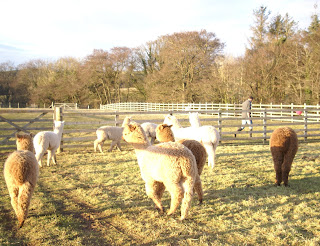 And finally, a very poor quality photo...but nothing better to lift the spirits than a paddock full of cria enjoying the rare February sunshine (and a man doing the work whilst you mess about with a camera!)