For most of the time I think that we are blessed to be living in the beautiful Eden Valley in Cumbria. We have peace and quiet, and amazing views; unfortunately we also have the slowest broadband ever. IT tasks that would take me five minutes at work, take me half hour at home. If I am lucky! Hence, when I eventually got round to putting Synergy and Alfie on the for sale list on Thursday, this was accompanied by much cursing. In the end I gave up, and left Synergy with just a head shot. It was at this point the telephone rang "I was just wondering if you had any boys for sale and ready to leave...."

So the boys were sold without anyone seeing my efforts on the 'for sale' list. It is all rather exciting. The boys are to be going to live on a farm, with a family who have lots of livestock experience...the exciting bit?...they are to be picked up on Christmas eve... and are a surprise for their teenage daughter, who has all but given up hope after years of wanting alpacas. She will be coming for a husbandry day in the New Year so I will get to meet the lucky recipient then. Although I think mum and dad are just as keen. I always find it amazing how farmers come along and can point out your best bred alpacas in the middle of the field!

The weather has been cold and wet. No change there. But poor Legacy of  Purston, who we think is 15 years old (Peruvian import, so can never be sure), is feeling the cold. I am not sure that he is very grateful about it, but he is now wearing a rather fetching coat. This has caused great amusement amongst the other alpacas as he struts about. 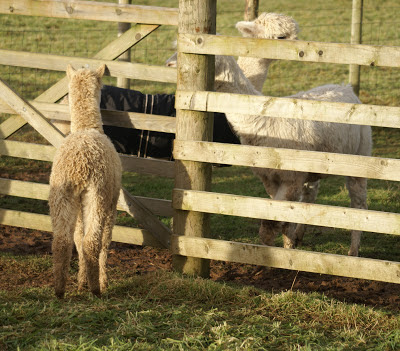 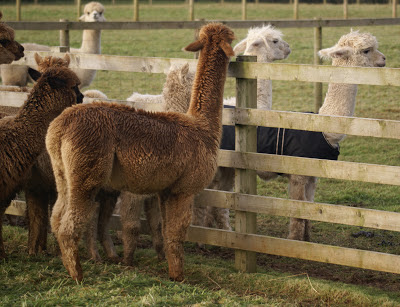 Soon a crowd begins to gather.

The next photo is for Judi, who often comments about how clean my alpacas are. Well, I have lost the battle with the mud. Beck Brow Lexus (on the right) seems to have got especially black. Lexus has one of the best (if not the best) fleeces of the cria born this year. She has been sold, with a mating to Beck Brow Explorer next year...am I mad?...possibly, but I own her dam; Morden Hall Honaria, who will have the first Explorer cria born. 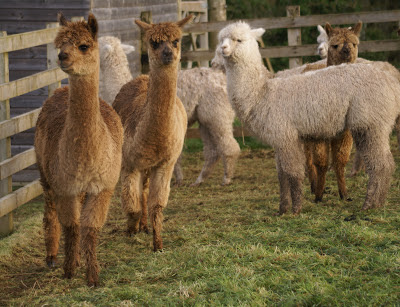 As is the norm with us alpaca breeders; I am already getting excited about next year's birthing season. Having sold more alpacas than we had born this year, it is just as well that we are hopeful for over 30 births. I admit the fact that Explorer will be having his first cria in 2013, plays a large part in our high hopes for a great crop of cria, but we have females pregnant to an amazing list of stud males:

Fingers crossed for plenty of females. We have sold all of our females born in 2012, with the exception of Sox, who Paul has decided is going to join the core herd (because she is so good he tells me... nothing to do with being smitten of course!). I realise that she features in more blog photos than any other alpaca...but she is rather photogenic. Take Coco for example, she is a lovely looking cria with her nearly black face and ears, but she always puts her ears back and stands in a heap just when I decide to take a photo...so Sox steals the show again! 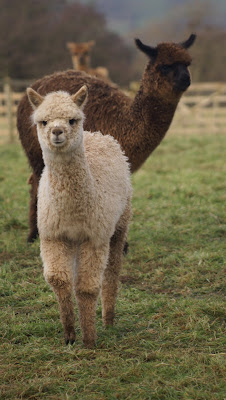 yes, another photo of Foxy Sox (Wiseman Sweet Coco behind)

Yesterday we gave the herd a dose of Fasinex, along with their monthly vitamins. We don't live in an area troubled by liver fluke, but after such a wet year we decided to take no chances. Everyone behaved so well. I kept saying to Paul "she can't be pregnant...she is so friendly" but by the end, I had to assume that either no one is pregnant (well maybe Snooty Boots...she was a bit...well snooty) or they are just very friendly girls.

I should have been at a Christmas fair today, but it seems I was too late with my booking. So only one more fair to go now. Actually I am rather glad to have a weekend off from selling alpaca wear. Much prefer enjoying the alpaca chores.
Posted by Unknown at 12:29