I've been waiting to write a blog...waiting so I could tell you about our latest cria...the one that we are still waiting for! Obviously I should know better by now...it would seem that the more eager you are; the longer that you wait. Cambridge Camilla and Inca Van Dieman Chaska are both looking primed and ready to go...but no...not today. These are probably the two females that I am most excited about this year...so they are sure to be late. It could be a case of a watched pot never boils...not wanting to miss any action I stayed up today after working a night shift...when I say stayed up I mean that I didn't go to bed...it would appear that I managed to fall asleep in the birthing paddock...well two hours had some how passed unnoticed and I woke up next to Hoity Toity!

Things are getting back to normal here as Lullaby now goes between 11pm and 6am without a bottle. She is putting on weight and now weighs 7.7kgs, although still looks under cooked. She is best friends with Bendigo (who is also getting the occasional bottle supplementing Katkin). The culture and sensitivity on Katkin's milk sample came back growing Staphylococus Aureus. It was sensitive to the antibiotic that she was on, however the vet advised to extend from a 5 day to a 7 day course. 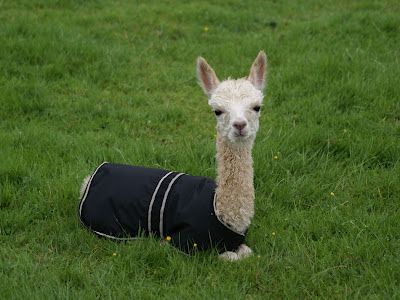 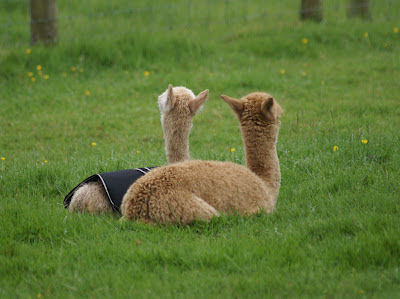 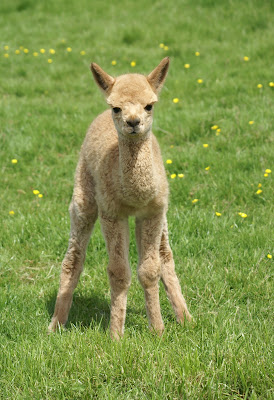 Bendigo not sure if he likes his photo taken whilst mid motion! 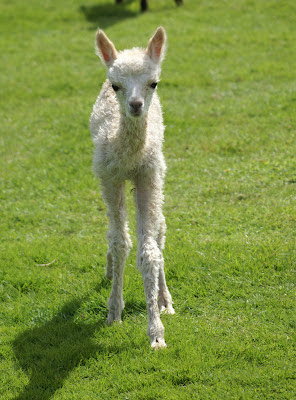 Lullaby coat off in the sunshine...still tiny

We delivered Anzac Hollywood's Attitude to his new home at Swinden Rise Alpacas on Saturday. The rain was relentless but it didn't put him off getting on with the job in hand an arrival. We have heard that he is settling in well...thankfully...I have a very big soft spot for Hollywood...it was a wrench to part with him...but he needs to be working and Waradene St Patrick is hogging the coloured girls at Beck Brow. St Patrick is doing a great job with all of his first matings of the season spitting off.

After last year's 500 fleeces to sort this year is a doddle. I have skirted our show fleeces (9 this year). It is always good to have a really good inspection of the fleeces off the alpaca's backs. One of the surprises was Beck Brow Crystal Maze...skirted blanket fleece...female, 11 months of age...2.98 kgs!! I had to weigh it 3 times to be sure...well at least she will get full points for weight.

I have just had to pop out to sign for some parcels...I can't believe how much stuff I have ordered from Medisave. I have found them to be the cheapest and most efficient when order syringes, gloves, Virkon etc. I had rather hoped the boxes might have contained my alpaca bedding set bought at the World Alpaca Conference...but we are still waiting!
Posted by Unknown at 15:51