The will to live is a marvellous thing...whilst we were trying our very best to keep Bahati's cria alive...we were prepared for the worst. However, we have never had a cria so determined to survive. The credit has also got to go to Paul, who has been doing most of the bottle feeding, both day and night.

She is still too weak to lift her head unaided, but she can nearly balance on her feet with some support, even if it is for very short periods. We have been doing lots of passive exercises with her to try to develop some muscle. However, the key to her surviving thus far is that she takes a bottle well. We have been milking Bahati to keep her milk supply, but she is on goats milk for the bulk of her feed. She did have some loose stools yesterday (I expect due to the cows colostrum) so we have been adding re hydration salts to her milk and we have also been giving her a little probiotic goats yogurt. Her tummy does seem to have settled today. She has neither gained weight nor lost any. She is definitely switched on...she is just so very weak.

One thing that I didn't mention on my last blog was the use of liquid glucose. I have in the past used honey to kick start hypoglycaemic cria (initially rectally if the temperature is too low to feed) but I purchased some liquid glucose (available from cake decorator stores) and decided to give it a go. We both felt that this had a really big impact when we were trying to keep her going whilst warming her. 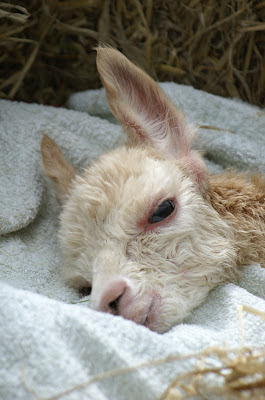 The sun came out for a short while this morning so I decided to take the High Dependency Unit outdoors! Unfortunately it didn't last for long...the heavens opened without any warning...it is a while since I have ran so fast...she was more or less dry when I got her back in the barn (don't tell Paul!) 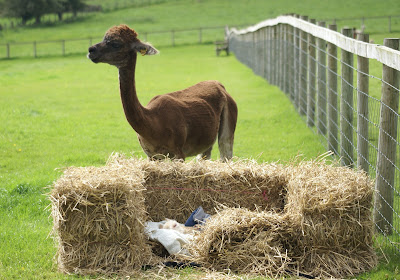 I did intend to take photos of all of the cria but unfortunately I had only got as far as Coco when the rain came down...they were all in the barn much quicker that I managed to make it with Lullaby! 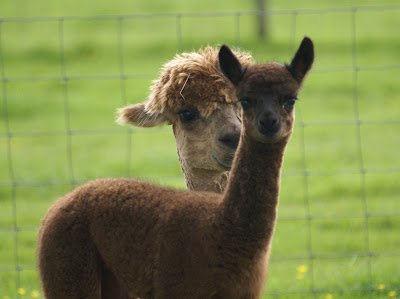 One of the reasons that Paul was on duty on Monday was because I had agreed to steward at Northumberland County Show. We had decided not to enter this year as the show was later than is usual; due to the Jubilee, and we didn't want to delay our shearing. However, as I still had the Supreme Championship Cup (won by Beck Brow Explorer) and needed to give it back, I couldn't really cry off. Numbers were down this year, with a lot of entries unable to attend, however as is always the case; it was a relaxed and fun event and it  ran very smoothly...meaning it was over by 14.30hrs and I was able to get home early afternoon.

I didn't take my camera but our friend, Andy Stewart kindly shared his photos from the day. Here are a couple of my favorites. 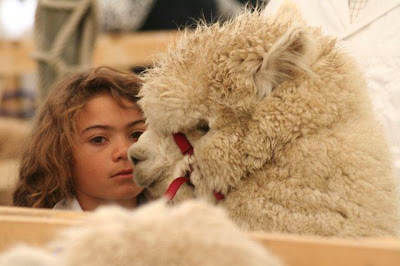 The most delightful junior handler award...had there been one...would have gone to Northumbrian Alpacas 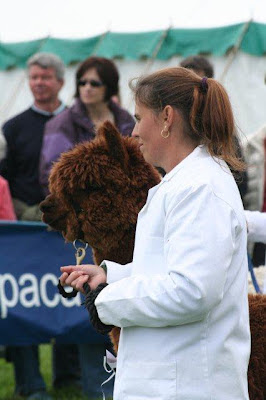 ...and some of you may recognize these two pretty brunettes!

We have got our fleece results back from AAFT, and like Rosemary we are also impressed by the service and the amount of information provided. Unfortunately I missed sending a sample from Explorer. Hopefully I can work out where a midside sample is as I sprayed purple spray on his biopsy wound!

One of my favorite fleeces belongs to Silverstream Galaxy ET. It is not the longest, but if you consider that she is five years old and has had three cria, and that she is also mid fawn...I would say not bad;

It's bottle feeding time again. I must also check the paddock. Cambridge Camilla is bagged up and showing all the signs of thinking about birthing...she is only 11 months so I wasn't expecting her to be so soon...after all she was pregnant for over 13 months when she had Explorer...she could however just be teasing.

We have been trying to get Explorer working with some unsuccessful but amusing attempts...I will share next time!