The Pot has Boiled!

Yes, after waiting all week...fully prepared for any number of births...the pot eventually boiled at the most inconvenient  time..and in the rain. To be fair it would have been difficult for Chaska to avoid the rain...but why did she have to wait until the day after I had worked a night shift. I tell you our alpacas don't like me getting any sleep.

Not only that we were due to deliver Anzac Almost Illegal... who was going on his holidays to the North East Coast to service a few ladies...a little rest and relaxation! I was looking forward to catching up with Kathryn (a fellow nurse) and seeing her girls again. However, as Chaska started to birth just as we were about to leave, and Robyn and Craig were about to have lunch,  I decided I best stay home. Which meant I missed out on seeing a Legacy cria born for Kathryn! (Legacy of Purston was on loan there last year)

Well, I have been looking forward to Chaska's cria...it was bound to be a fawn female...after all she was purchased with St Patrick in mind...she was purchased not only because is she a top female (Jim Watt's assessment) but she is a lovely deep fawn. Last year she had a white male (sire Neptune of Houghton - light fawn)...St Patrick is much darker so surely she wouldn't do it again...well not quite but nearly...a beige male...but again a very handsome one. Half brother to Magellan; we have kept to the theme, and named him Shackleton.

Now we are having a debate as to who to mate Chaska to this year. She obviously does not obey the rules. Possibly she has a white spot gene or more likely a lightening gene. Paul wants to put her to Explorer. I see where he is coming from; if she is going to have a white then she is a great match for Explorer (she has fantastic density). However, I want to try Black Sabbath...after all she does not follow any rules so who knows what she may have...opinions welcome! 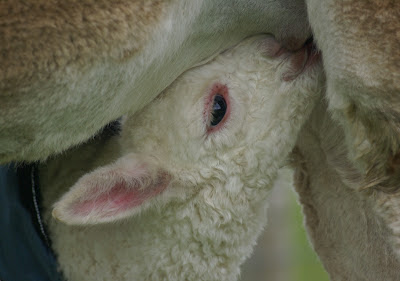 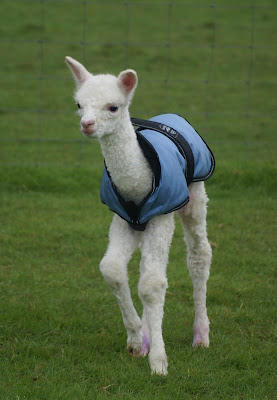 Shackleton...weighed in at 9.5kgs this morning 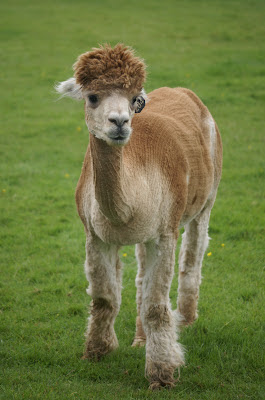 Inca Van Dieman Chaska...keeping that lovely colour to herself!

Thankfully my alpaca bedding set from Penrose Products did arrive at a convenient time (Penrose Products donated 20 bedding sets to the WAC charity auction and we won the bid on one set). The duvet is on a guest bed as it is a double bed size, but we are using the pillows...they are brilliant...I will be placing an order for some more. Great to see alpaca thirds being put into such a top quality product.

Right I am going back out to watch the pot. I am making a family meal for this evening as it is my Father's birthday, and doing some training on giving injections this afternoon, so a birth sometime this morning would be good! Or alternatively...the girls are coming out on the train on Wednesday...they are bringing lunch...and by the fact that they are coming on the train I expect some refreshments too...wouldn't it be lovely if they could see a birth...maybe if we don't watch to closely!

P.S just caught Sophia feeding two cria...who was the additional cria...was it Lullaby whom we are bottle feeding?...Ben who is needing topped up with bottles?...NO...it was Lexus who already weighs 3 kgs heavier than her own cria Lula...she doesn't need any more Sophia (interestingly Kenzie - Lexus's sister was also a milk thief despite their mother having plenty of milk!)
Posted by Unknown at 10:23