Give the boy a cigar!

I mentioned on the last blog that we have been trying to persuade Beck Brow Explorer that he would like to start working. First of all we tried getting him to watch St Patrick at work...we put Metisha in the pen with him...Metisha sat...Explorer ignored both her and St Patrick... and stared longingly at his little male pals across the lane...voyeurism obviously not his thing.

Next I had the idea of letting him run in the paddock with Metisha and Crystal. I also put in Alfie one of his little pals (too young to work)...my theory was a bit of competition might spur him on. Unfortunately Explorer was more interested in Alfie... at one point Alfie was mounting Crystal and Explorer mounting Alfie!...Alfie was removed.

Well, left to his own devices...in the privacy of his own paddock...Explorer has done the deed...the lucky girl being Metisha...I have to say he looks mighty pleased with himself...no assistance required! 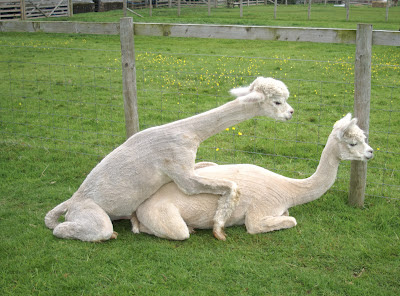 We have also had another birth; Morden Hall Honaria has given us our third girl. We are not quite sure if she is beige or white yet (last year I was very good and registered all our cria within 6 weeks of birth...I have since had to change a white to beige, a beige to white and a brown to fawn!) Weighing in at a healthy 9.5 kgs she was quickly up and away. I have named her Lexus (I seem to be on a bit of an 'L' thing at the moment) 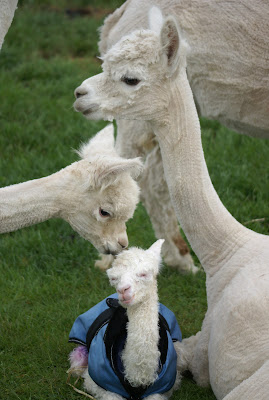 Honaria with Lexus (and Adelle)

Lullaby is a little stronger. She is talking her bottles well but still cannot stand unaided. She started with constipation yesterday but we had a good result from a soapy enema. We have been trying to be careful not to imprint human behaviour on to her. Unfortunately Velvet does not understand this, and I expect Lullaby is going to be barking shortly. I have caught Velvet licking her on a number of occasions...giving her a proper wash and looking up at Bahati as if to say "look at the state of her...you should be doing this"  If anything happens to her, Velvet is going to be as upset as Bahati.

Talking of licking...Katkin always like to lick her cria...here she is with High Winder Bendigo (Ben for short)...I don't think he is too keen on this kissing malarkey! 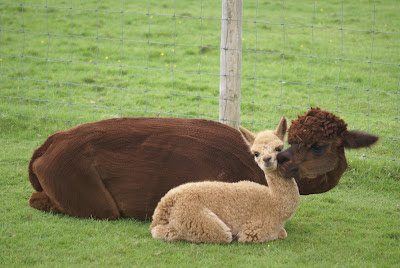 Katkin and Bendigo
Posted by Unknown at 17:16