When to mate...and being late!

I have broken a promise...I feel bad...but it had to be done. I had promised Baheti that she could keep her cria (Poppet) until she had been remated (we have kept her open over winter). However, now that we have decided to take Poppet to The National show, she needs to be weaned and halter trained...I know that I am mean... but what to do?
We have been umming and ahhing about how soon to start matings this year﻿ (sorry Baheti early April is just too soon for us). Last year we ended up being a little bit later than planned when we started our first matings of the year in late May. This resulted in many June matings as we hadn't really accounted for the fact that we were mating maidens with a male - Anzac Hollywood's Attitude - who was also new to the game. Consequently some of the girls took a few attempts to get pregnant. But with the vast majority of our females due to give birth in May and June we are quite happy overall.
However I do think that we will probably start late April /early May this year (Paul's brother has just announced his wedding date for the 1st of April 2012 so we need to avoid any births at that time) this should result in some earlier births for 2012. Although Camilla, who was due in April last year managed a 385-days gestation period (average here 337 days)...so who knows!
Our first due date for this year is the 12th May (using an average 340-day gestation period for a maiden). All being well Hollywood should have 4 births in May. I believe (from Facebook!) that Hollywood's sire, Jolimont Attitude, has just taken the Supreme Championship (at 12 years of age) at the Salbris Alpaca Show in France. Lets see if  our boy can pass on some of his attributes. Hollywood has an amazing weight of fleece; a combination of great length and density...lets hope he shares! 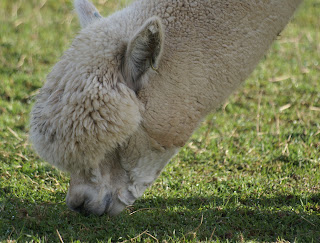 Anzac Hollywood's Attitude...first cria due in May 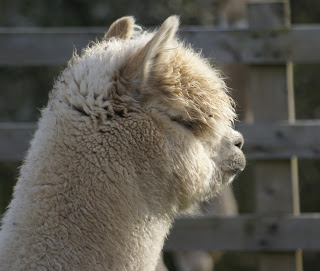 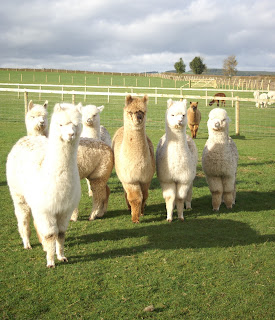 Poppet at the back of the photo...still not sure which gang she wants to be in﻿!
I actually started writing this blog at 10 am this morning...the plan was to write a short blog then have a relaxing day... after all of the decision making that I have been doing of late I felt that I deserved it. I don't really do pampering, but as a special treat (using some birthday vouchers) I booked myself in for a Reiki massage...to chill and relax...to clear the mind.
As is usually the case; I allowed myself the whole of 15 minutes to shower and change. Just as I remove the first sock; Robyn arrives (too nice to be rude to...7 minutes gone); then a phone call (this will put money in my bank account...too important to miss...another 5 minutes gone). Second sock removed; another phone call (Cameron Holt specialist in all things alpaca...too interesting to miss...another 15 minutes gone). Another call (this time from Amanda regarding injections) and I am now seriously late. I have a shower but don't have enough time to remove all the paint splatters (what made me spray the stain on the bedroom ceiling this morning). So I arrive at the spa late, stressed, and covered in paint!
Still I managed to relax...I soon realised how exhausted I actually was...I think it was when I fell asleep...I vaguely knew than someone was snoring...obviously that had been me...just a tad embarrassing!
Posted by Unknown at 16:02