It was blood donor day today at Beck Brow. Four of the boys; Hollywood, Almost Illegal (Almo), Nimrod and Julius﻿ each provided a unit of blood. This was to be spun down to provide plasma for this years birthing season. All the boys behaved impecably, something which was remarked upon by the vet "if only everyone had such well handled animals life would be so much easier" Hey it's a pleasure! 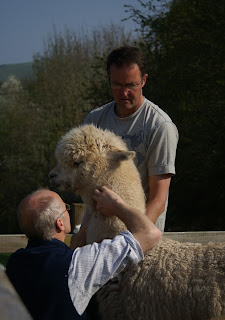 Almo getting some local anaesthetic inserted 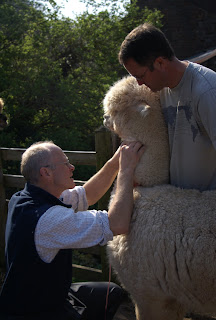 That's it...donation complete...just the needle to remove.
The warm weather meant that the blood vessels were easy to locate and filling the bags took hardly anytime at all. Hence, I was on the road to Manchester with my cool bag before 11am. This year I decided to get one of the bags stored in 50ml syringes ideal for giving orally. There is a lot of debate about the success of oral plasma, however we have heard a lot of success stories. I think the key is to give early, ideally before 6 hours, we know from experience with Explorer that giving it at 10 hours﻿ old was too late. We do have the IgG testing equipment to test levels at 48 hours. Thus, we can then give intravenous plasma if necessary at this point. Obviously a very sick cria would be given I.V initially rather than waiting. Lets just hope that we don't need to use it.
Nearly forgot. I got what I thought was a good tip today. If freezing plasma it is essential that it does not defrost then get frozen again (careful not to store it in a self defrosting freezer). The tip was to freeze it with an elastic band around the bag, then remove the band once frozen. If, when you come to use the plasma from the freezer, it is not in the same shape as when the band was around it, then it has been defrosted at some point (power failure or whatever). If it is stored correctly the plasma should keep for at least a year I am told. Useful I thought? Hope I have explained that in English!
Below is a fleece shot of Anzac Viracocha Black Sabbath for Rosemary (click on to enlarge). Sorry it is not a new one as he won't be with us until early June. He is going to The BAS National show so we will get to see him then. I have just had an email about the show entries; 350 alpacas from 66 breeders. Wow how things have changed from last year. It is going to be a tough one...what are we doing! 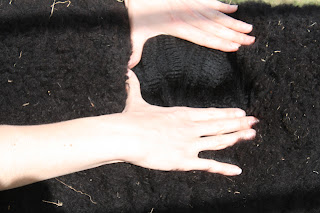