Our mail delivery isn't quite as efficient as it used to be...I do however have a dog with four legs...so I am not complaining. However, this morning after the trek to the lane end, I find a note to say that three parcels (that were too big to fit in the box!!) could be collected from the post office in the village. So back down the lane and into the car!!
Now these parcels could have been a number of things. Yes, I made the mistake of looking on Ebay for a wool winder...cost £36...final cost? Still unsure; lots of bids still active! Amongst the things 'won' (strange that you still pay even though you have won them) was a head...a display head...a head for displaying hats not yet made...a head that as I pressed the 'buy now﻿' button I notice was described as having " luscious tangerine coloured lips"...oops. So, I was a little concerned that she might resemble something from an 'adult only' kind of shop...and was hoping that the packaging was not going to get me talked about in the village.
Well here she is...rather too much make up for the farm but not too bad...probably would look quite fetching in the right hat! She is displaying a rather nice scarf designed and knit by my mother...Amanda and I have put our orders in! ...The wool winder also arrived and a tailors dummy...what will tomorrow bring I wonder! 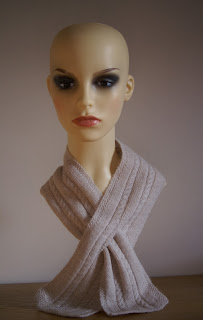 Luscious lips!﻿
As I am typing, I have noticed a slight aroma around me...it is not Velvet (who does eat too quickly) and it is not floral. The explanation;  Explorer has taken to amusing himself by spitting...it is more of a 'pouffe' than a proper spit...but﻿ he has been practising...usually it is aimed at his 'friends' but this morning he looked at me straight in the eye and gave me a little 'pouffe'...obviously practise makes perfect as I smell like the biz...I swear that the corner of his mouth curled up into a little smile straight afterwards. I call him gorgeous...Robyn calls him that little b****r!!

Oh...forgot...also ordered a couple of sheep coats...travel attire for the junior show team...a tip given by someone from down under who knows about these things...more wasted money?..we will see!
Posted by Unknown at 13:03