Thank you Dave (Apple Vale Alpacas) for inadvertently causing a heated debate here at Beck Brow. Dave kindly pointed out the printing error on the fleece entry form for The British Alpaca Futurity; It is the 6th of February not January as printed.

The debate?...Paul thinks that it is pointless (no pun intended) entering Lady Gaga's and Galaxy's fleeces because of their weight (over skirted to 6 points!). Both got otherwise very good scores at The Scottish National (Cameron Holt) e.g both 20/20 for fineness and handle so no points to be gained there. I weighed Lady Gaga's fleece again...but it is only me who has put on weight over Christmas...still 6 points! Okay so she can't get a red ribbon...but any ribbon would be nice...surely worth a try and good to take part. Next year the scoring system will have changed to have less emphasis on weight, but even so; less zealous skirting required!

I have also put in the two entries for the halter classes. I had to make a decision; they are not going to get any cleaner before the closing date. If we change our minds we will have made a very generous donation to The Futurity fund...£130 as neither have nominated sires...ouch!

It is pouring down here today causing us to wimp out of the poovering. I am quite liking this full-time work at the hospital when it comes to certain tasks; Paul has agreed to do poo duties tomorrow whilst I am working a 12 hour shift...fair exchange I think!

I have been entertaining myself creating tables (as in charts...not four-legged ones) for next year's matings. Everyone has a first and a second choice stud male. For some this will depend on how Anzac Hollywood's Attitude has performed for us and also if any girls pregnant to outside stud males need to return (fingers crossed not).

With four males working (Black Sabbath, St Pat, Hollywood and Almost Illegal) we really could do with more females to choose from (Umm). I think Anzac Almost Illegal will only get a couple of girls until we see what he produces. I know that I am getting well in advance of myself but thinking ahead does make me feel that Spring is on it's way! Willow and Bahati (both empty) will be the first two girls to be mated this year...both down to have dates with Waradene St Patrick. Our first girl due this year is Nina who is at 11-months gestation on the 6th of May...now that I have typed it it does seem ages away! 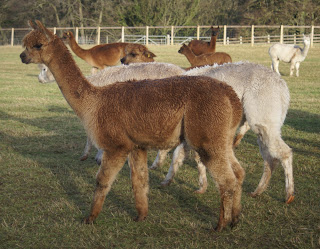 A rather wet and bedraggled Beck Brow Sweet Willow...due to get a date with Waradene St Patrick
Posted by Unknown at 14:43