The closing date for entries for the British Alpaca Futurity 2011 halter classes is fast approaching... I missed the closing date for the fleece section thinking that they were the same date. However, I already know that I have lost too much weight by over skirting, so probably best to leave it until next year! ... Our two possible entries for the halter classes are; Beck Brow Explorer and Beck Brow Fine Romance (Roma)...both white (did I once say I was going to concentrate on fawns!!) so they would be in big classes...big enough that no one might notice quite how dirty their fleeces are?...I doubt it.
We don't cria shear, largely due to having Summer births rather than Spring ones, thus meaning it is a bit late for them to be exposed to our northern weather. A good decision for us this year with the early onset of winter. Unfortunately this means that we have seriously messy cria fleeces...and I do mean SERIOUSLY! It started to go wrong in December, despite my best efforts, more hay seeds appeared in the fleeces daily. With the alpacas more or less permanently in the barn, sweeping up discarded hay became a lost battle.﻿ 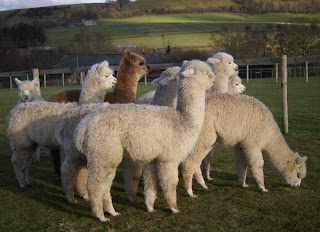 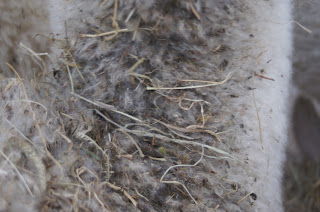 Roma's neck...photo taken in December
﻿It is a bit of a drizzly day here today. Not great for taking photos, so I have been having a better look through the ones that Paul took at the weekend...initially rejected by quality control...I think that he may have been trying a tad too hard to be artistic...either that or Finian is being a very accommodating model...strange!﻿ 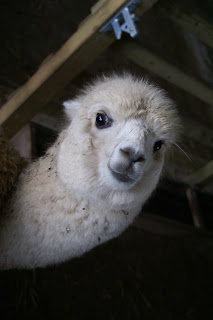 I have been watching the boys from the landing window. St Patrick appeared to have been sent to Coventry by the rest of the gang yesterday...I am not sure if he was actually being ostracized or if it was self inflicted exile...whatever, all seems well this morning...friends reunited. Actually I think the problem lies with St. Pat; named such because of his date of birth, he is definitely no saint at feeding time. Despite each of the boys having their own meter long trough, spaced well apart, he does like to cause disagreements due to greed.
Lastly; Paul was obviously having no luck with the alpaca photography as part of his weekend duties...so it looks like he turned to Velvet for help. She appears to be being less than helpful...heading out of the cat flap...look at those dirty paw marks...is anything clean around here!! 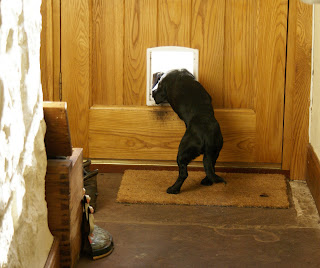 Oh no...I thought that I had missed the photographic competition closing date as well...seems not...have I got time to get some good shots in ... are we going to let them boys win again...I suspect that Dave (Apple Vale) has been practising!...another one for next year I think...I am obviously working too hard!﻿
Posted by Unknown at 11:33