One of these days I will write a blog that isn't about a show! However, as it has been rather none stop of late I have not had time for much else.

Saturday was the NWAG Alpaca Championships, and as Gold Sponsers we are very involved with the organisation, thus work started on Friday. Now, this show is only 20 mins from our farm, hence I agreed to take some alpacas who are agisted here (9 belonging to 4 different owners), and I also entered a rather large show team of our own (15). What I hadn't considered was how we were going to transport them all. In the end 2 of ours stayed at home!

We had 125 Huacaya entries and 12 Suris this year. NWAG is always very well supported by breeders, both as exhibitors and sponsors. I have to say a special thank you to Fallowfield Alpacas who sponsored the Best of British, which wasn't included in the catalogue (apologies guys).

So we had 23 alpacas to show, which kept our Beck Brow team rather busy! We took 13 Beck Brow owned alpacas who came home with 7 x 1st, 4 x 2nd and 2 x 3rd. Nothing below a third place, and a number of 2nds where we had taken the 1st!

Now for the Championships; our first was Reserve Champion Brown Female which went to Inca Havanah. She was beaten to the Championship by a female I selected to take from our agisted females, Prima Lillibet (I am generous like that!).

However, the ones that I really secretly wanted were the fawn and white males (this is where my true passion lies). Therefore we were delighted when Beck Brow Crafter (sire: Waradene St. Patrick ) wowed our judge Cathy Lloyd, and he was awarded Champion Fawn Male. She commented on his advanced fleece style, the fineness and density, and his fleece growth and coverage. A clear winner.

Now it was going to be down to Beck Brow First Edition. Could a junior get the Championship. First in his class with Beck Brow Bespoke 2nd (also highly praised). Cathy did an amazing job of keeping us in suspense whilst judging the White Champion, back and forth along the line, you could have heard a pin drop, the tension was so high...but as she said "she just couldn't get past the junior. He has the kind of advanced fleece we are all aspiring to achieve" so Beck Brow First Edition (Eddie to his friends) took the White Male Championship, Best of British Huacaya and Supreme Champion Huacaya...go Eddie!!!!!

We had a fantastic show, with so many of our clients doing well in the ring. Nero Black Truffle (sire: Viracocha Black Sabbath) took the Black Female Championship. Beck Brow Testimony (sire: St Patrick) now owned by Teesdale Alpacas took the Light Male Championship. Florens Davinci (sire: St Patrick ) took the Reserve Fawn Male Champion. Beck Brow Explorer only has 8 progeny and 4 of these were at the show. In the second junior white female class Prince Bishop Summer Rose took first place, and Beck Brow Miss Molly second. In the junior white male Beck Brow First Edition took first and Greenside Voyager took third (with Bespoke in between who got second to Eddie at the National)

Apologies, a rather long blog but what an exciting day. Beck Brow Explorer our multi Supreme Championship winning male...has produced a Supreme Champion with his first progeny...so happy. 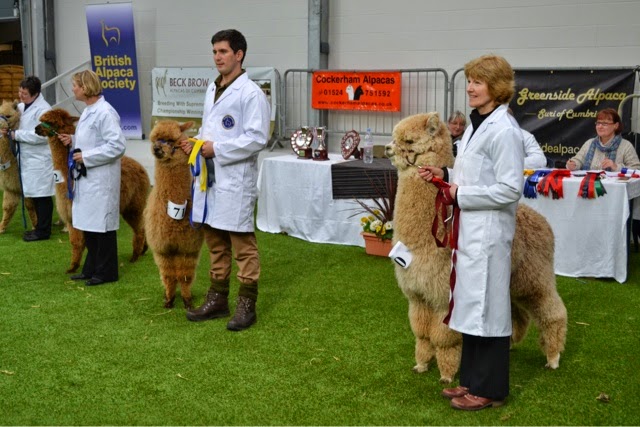 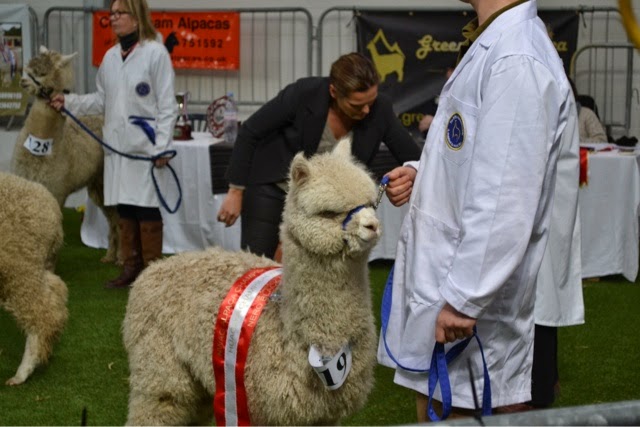 Unfortunately we didn't take a camera so have no photos of the show (above supplied from Stuart Velvet Hall Alpacas) or the awards being presented. Lesson learned...You cant be everywhere at once!

Whilst all this was going on in Cumbria, we found out this morning that exciting things had been happening for us in New Zealand too; Cambridge Stargazer (sire: Windsong Valley Firedragon) has had a daughter (sire: EP Cambridge Peruvian Spartacus). So a great result.

It has been back to work this morning, moving the alpacas in to different groups. The male and female weanlings have been seperated, which was tough as it meant breaking up so friendships (poor Crafter loves Cats).

I put in our entries for the Fiesta last night. I am going on my own so only taking four. A completely different show team. Two of which are not yet halter trained!
Posted by Unknown at 11:22