I am afraid that we are back to a blog on showing again, as last weekend was the Heart of England Alpaca Fiesta. Now, the closing date for this show was the day after the NWAG show, the show where we had taken Supreme Champion. So maybe I was feeling a bit ecstatic still, but I decided as Cathy Lloyd was judging both shows, that I would take a completely different show team, and leave all the Champions behind!
So the small, but select, show team was made up of, Bozedown Campari (this is the female that we chose from the Bozedown herd following our winning bid at the Alpaca Classic, the bid was to have the pick of the 2012 born females) never shown before. Beck Brow Sugarbabe (dam: Cambridge Camilla....dam of Beck Brow Explorer. Sire: EP Cambridge Fortitude) never shown before. Beck Brow Bespoke, who keeps coming second to Beck Brow First Edition, so we thought he deserved a solo outing. Finally Beck Brow Inkster, because he is well behaved and Bespoke needed a friend!.
First in was Inkster who came a respectable third. Next up was Campari, first placed Intermediate brown female...and Champion Brown Female! So far so good on day one. Day two saw Sugarbabe in the ring early in the day, and we again did well with a first place and Reserve Champion Light Female. We had to wait a while for the junior white male class, which was a big one, but Bespoke took first place, without Eddie there to steel his thunder!
So there we were, ready to pack up, when we were told we needed to go back in to the ring. Both Bespoke and Campari were eligible for the Best British Bred Alpaca as the highest placed British Alpaca in their colour (male and female). Cathy Lloyd (judge) was obviously having a big difficult decision to make...the organiser was called into the ring...after some discussion Cathy announced that she wished to award both a male and female champion...held breath...the male champion; Beck Brow Bespoke!! How exciting...and the female champion...our Bozedown Campari...I couldn't have been more excited...wow what a result for our little team.
A big thank you to the organisers of the show (I know how hard it is), to Michael Henderson who was my travelling companion and helped me through out the weekend, and of course Jean MacDonald who handles in the ring and would appear to be our good luck charm! 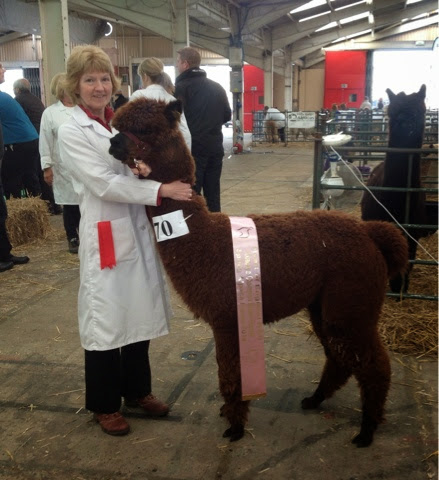 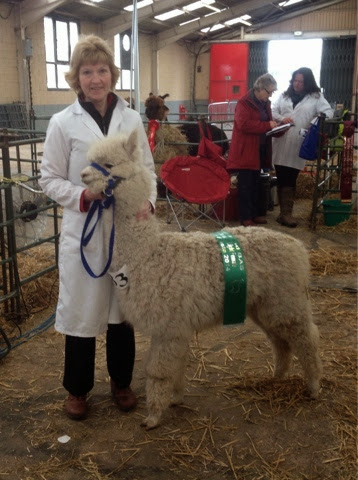 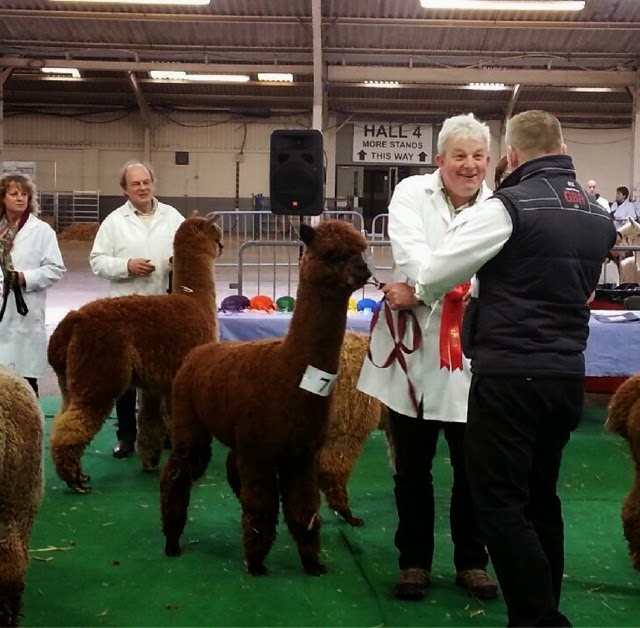 Michael handling Campari in the ring as she gets Best of British Female
We are still waiting for our first birth (371-days gestation for Courtesse) and now have 4 in the birthing window. My guess is Liza (an agisted alpaca) tomorrow!
Finally due to requests...another photo of our granddaughter, Henrietta Rose... 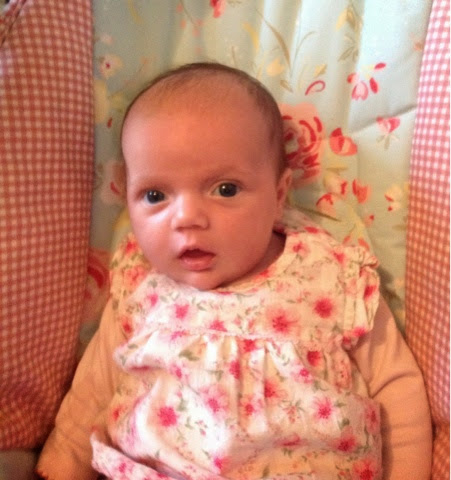