I was so looking forward to Showtime, at Houghton Hall Equestrian Centre, at the weekend. I realised that last time I had attended an alpaca show, without being an organiser, apprentice judge, or ring steward, was in 2012!  And I wasn't to be disappointed, as predicted Houghton Hall, the Alpaca Stud and Bozedown Alpacas had organised a great event.
As I was going without Paul, I decided just to take four juniors, that way I could take the van and no trailer. First into the ring was Beck Brow Sunday Best (Sire: Virachocha Black Sabbath) who came third in a class of 12, behind the Champion and Reserve Champion. The reserve Champion female was won by the lovely Nero Black Truffle, who is also sired by Black Sabbath.
Now at the National show I was a little disappointed that our two junior fawns who both got placed fourth. They had got very sweaty at the National, so it was going to be interesting to go up against the same competition. Beck Brow Cat's Pyjamas was given a very thorough inspection by the Australian judge, Peter Kennedy, and came 2nd to the eventual Reserve Fawn Female Champion. So a big improvement.
Next up was Beck Brow Crafter, his class included those who had beaten him at the National, as well as some unknowns. Hence I wasn't really expecting much of a change in position...wrong...how wrong...first placed junior fawn male!
We had to wait until Sunday for Beck Brow First Edition (Eddie) to go into the ring. There was a lot of anticipation about what he would do, he had been seen and admired greatly by many breeders over the weekend. Well, it was very close, the judge had Eddie and his competitor pulled out the front to compare for ages, going over and over them both. But eventually Eddie was placed second. He was penalised for being underweight in the end. However, the winner of the class (owned by Classical Mile End Alpacas) went on to get Reserve White Male Champion (beating the Supreme Champion from the National Show) behind the eventual Supreme Champion ...so near!
Now we need to try to fatten Eddie up. I was concerned that I had missed that he had lost weight. So as soon as we arrived home, I had him on the scales. No weight loss. He just hasn't really gained weight since he was weaned. He was 28.5 on weaning and he is now 30.5kgs. We knew he was slender and he has had lots of minerals and vitamins over winter. We have just had a tough one, despite introducing haylage and extra hard feed we just haven't had the weight gains this year in our later weanlings.
So I was really pleased with our results, we had some tough competition in each of the classes and were only beaten by eventual Champions. I am already looking forward to next season and showing Eddie as an intermediate (fattened up over summer!)...that's alpacas for you...wishing your life away!
It was a great weekend, everyone seemed to have a really good time, I really enjoyed watching the judging and listening to the oral reasoning. A big thank you to Jean and Stuart from Velvet Hall Alpacas for helping me all weekend. Especially to Jean for showing the alpacas in the ring with such success and to Stuart for helping me to get away so sharply...home by 20.10hrs! 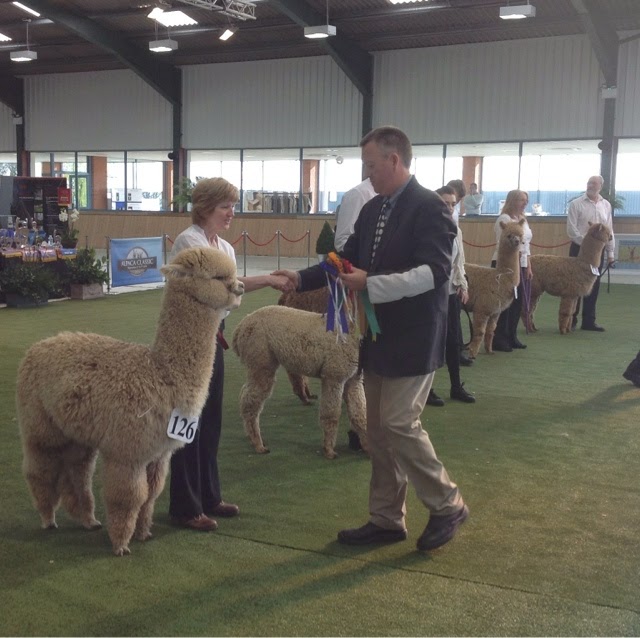 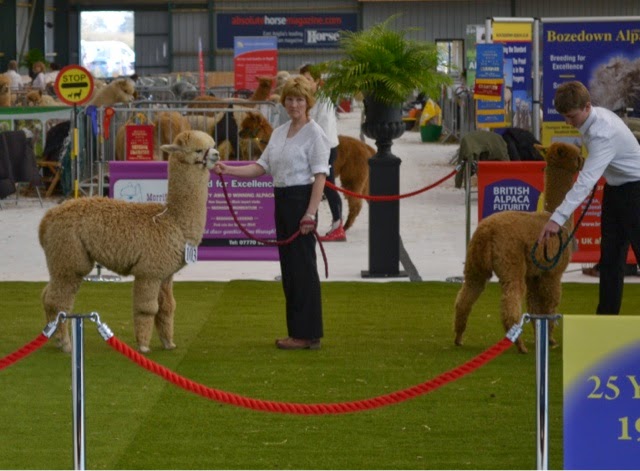