New Females and a Stud Male For Sale

We seem to have spent every weekend since February on the road. And this weekend was no different. At least we had a slight change of direction with a trip down the A66 instead of the M6.

This time we set off with an empty van and came back with a full one...well not quite...just two new females. We have been having a good look at our herd and making plans...one of those plans was to introduce some more black in to our herd (we have a share in Viracocha Black Sabbath a prize winning black macho who will be coming to us in June). So we have purchased two females sired by the very impressive Warramunga Downs Miguel of Fowberry. One black and one fawn...yes I know...why not two black...well the fawn is out of two blacks...she has a lovely fleece...and the icing on the cake...she is pregnant to the Futurity Herd Sire Champion; EPC Top Account of Fowberry, and due next month...exciting!

Another decision has been made to put one of our herd sires up for sale. We knew we had too many males in ratio to our females, and this was confirmed on our herd assessment. Much better to concentrate on a couple of males, and that way we can measure traits and progress much more accurately. We will therefore be using Beck Brow Explorer and Waradene St. Patrick of EPC over most of females this year. Legacy of Purston, who is 15 years of age, is due for retirement (he has produced around 120 progeny since importation so deserves a rest...he won't think so!). So the decision has been made to put Anzac Hollywood's Attitude up for sale. He is such a lovely male...but we just don't have enough work to do him justice. 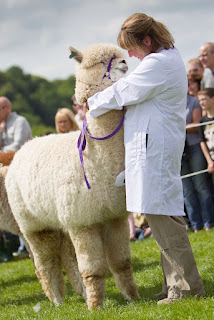 Below are a couple of photos of the new girls, taken this morning when they were wet (they don't seem to be bothered about going in the shelter at the first drop of rain as ours do) so looking rather soggy! 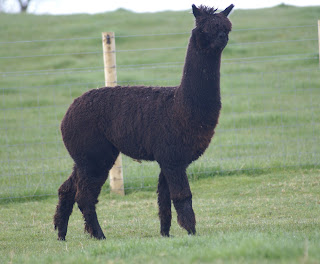 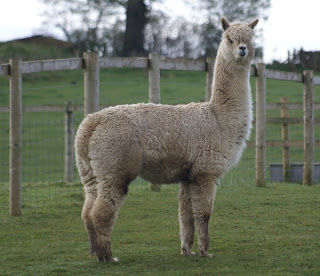 Our new fawn female (3 years of age) due a Top Account cria next month...she will also be mated to Black Sabbath.

I saw the strangest thing on Saturday...unfortunately I didn't have my camera...a crow was sat on Legacy's back pulling out his fleece (he appeared oblivious to it) when it had a beak full it flew off... then 5 minutes later it was back again for more...it had obviously heard about the exceptional properties of alpaca fibre!...talking of which I am looking forward to receiving my alpaca duvet and pillows purchased at the World Alpaca Conference charity auction...bit cheaper than an alpaca at least! 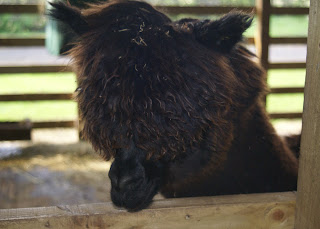 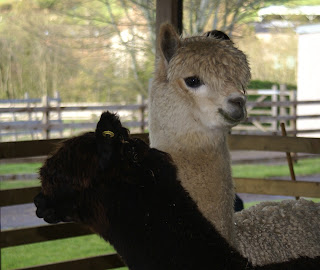 Right just to add to the comings and goings we are delivering Nina to her new home this afternoon. Then it will back down the M6 again on Friday as we head off for the Heart of England Fiesta.
Posted by Unknown at 11:21