The Heart of England Fiesta 2012

We arrived back from the Heart of England Alpaca Fiesta at 01.45 hrs...rather later than anticipated and with 3 extra alpacas. No, no more purchases. The alpacas belong to our friends at Cockerham Alpacas who broke down on the M6. The AA refused to tow the alpacas home...so eventually after 3 hours the Highway Agency managed to organise for them to be towed off...luckily we had the van and trailer so managed to get the alpacas home...what do they say about friends in need!!!!

Anyway we had another great weekend. Owning alpacas has brought so much into our lives...apart from the fact that they are a pleasure to own and a privilege to look after....we have met so many tremendous people through our common interest in alpacas. I can't pretend that everyone wouldn't like their alpaca to win, but I never see anything other than good sportsmanship and genuine congratulations to the winners.

We did take Beck Brow Explorer in the end, I entered him just a few hours before the cut off time for entries...and I was so pleased that we did...I was so nervous when he went into the ring... he had some serious competition...not least from ACC Pathfinder (another Cambridge Navigator male) who took the white championship at the Alpaca 2012 Show a couple of weeks ago...it was close but Explorer managed to take 1st placed Intermediate White Male...go boy!

Interestingly Nick Harrington Smith, who was judging, asked Paul if Explorer's fleece had been 'altered' since shearing...he obviously thought that he may have been trimmed due to his lack of visible guard hair anywhere...even his chest...we were pleased that he asked as we were able to state absolutely no way...I would rather be last than be dishonest...but Explorer is incredible in his uniformity of micron throughout his fleece.

The social side of the event was great fun as always. I managed to sit on the 'naughty chair'...the one that tipped you on to the floor when the required amount of red wine was consumed...the chair that went on to not only tip the next occupant on to the floor... but out of the patio doors and on to the patio...naughty chair! 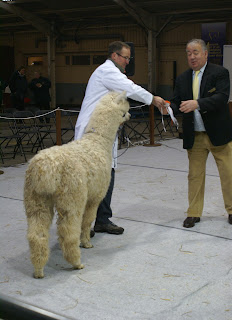 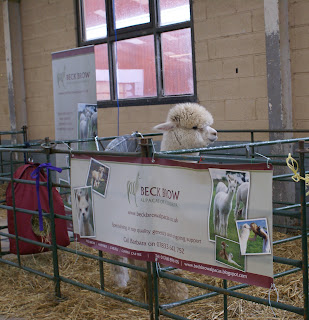 The supreme Champion went to a fabulous fawn male owned by Bozedown Alpacas: Bozedown Achilles...the standard was again judged to be as good as anywhere in the world...a fantastic weekend and well organised event.