The British Alpaca Futurity was held at the NEC Birmingham﻿ this year, and in our opinion was probably the best Futurity yet. Chas and Rachel from Classical MileEnd Alpacas are key in organising the event and they received a well deserved standing ovation last night. It was amazing with 442 entries from over 60 breeders I didn't witness even one glitch. Having 2 rings running at the same time worked really well and meant that we actually had time to prepare ourselves for the gala dinner this year.
I often hear breeders talk of the British Alpaca Futurity as something for the big breeders "how are us small breeders ever going to get a look in?". Well, I can now say with absolute conviction that this is not the case. Yes, the large breeders are there, and some have 30 plus entries but everyone is in with a chance. We entered 4 alpacas and came away with 4 ribbons (Poppet 6th, Rumour 2nd, Magellan 5th and Explorer 4th). And we were far from alone. In fact all of our friends, with herds of similar sizes and smaller, did very well.
Showing is just one aspect of the Futurity, it is good to see other breeders' alpacas, but it also a great opportunity to network, or just plain old socialise. We did do a lot of the latter, in fact I have lost my voice today...but what fun we had. Thank you to everyone who kept us entertained, we had a great time.
Obviously the main aim of the Futurity is to identify the top herd sire. This is done by adding up the points gained by the nominated herdsires' top performing 9 progeny. We had to wait until the end of the meal for this to be announced...they kept us waiting...but it was certainly worth it. The winning male...there was some impressive whooping from the North...was EPC Top Account of Fowberry, owned by our friends Jenny and Graham MacHarg from Fowberry Alpacas based in Yorkshire. He only actually had 8 progeny entered making it even more of an achievement. We are pleased to say that our Beck Brow Rumour Has It's second placed was included in his tally. We were all just a tad excited!
I think Paul was going for the handler of the year award. He was in the ring rather a lot over the 2 days helping out, which kept him entertained. I think he was just avoiding allowing me the chance to drag him over to see the select auction alpacas! This year the auction was back to hands in the air (or winks) rather than online, and most of the alpacas made well over their reserve. The top price of £9,000 guineas was achieved by a beautiful black female EP Cambridge Chiddy Bang Bang, bred by Matt and Cathy Lloyd from EP Cambridge Alpaca Stud (Paul was sitting on my hands...she isn't coming to Cumbria) 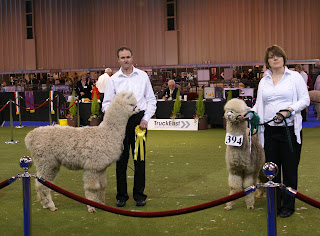 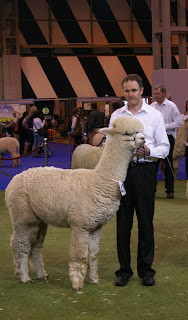 Paul with Beck Brow Explorer....this is at the end of the second day...note how he has been in the ring so often he hasn't had time to pull up his trousers!
And finally we won a prize in the charity draw...two executive seats at Manchester United home game during 2012 (courtesy of John Potts of The Alpaca Stud) a fantastic prize... but ﻿I suspect Paul won't be taking me!
Posted by Unknown at 15:29