Have a Gorgeous Christmas!

It just occurred to me on Monday that Christmas was fast approaching, and I had done very little about it. So, first thing it was a trip to the market gardeners to get a tree; it seemed that I had left it a bit late, no six foot trees left, I had to settle for a five foot one. But on a positive note I got a £10 reduction for my last minute purchase, and ﻿I didn't need Paul's help with the fairy (yes even I can reach that high).
On the alpaca front it has been all go. Everyone has been wormed (Cydectin 2%), toe nails trimmed, and the oldest cria have been weaned. We had no dramas on any front. The six cria; Magellan, Annabelle, Crystal, Finesse, Katie and Synergy are coping well. I am often asked about weaning and whether newly weaned cria should be out of sight of their Mums. Well, I really don't think there is a right or wrong approach, we have tried both. This year the cria are only separated by Explorer and his pals. Both Mums and cria seem happy that they can still see each other, and the cria have settled well (just a little whimper now and again from Synergy...the youngest...he also had the sweetest mummy in Galaxy).
I did mean to join in the shelter decoration challenge but forgot to buy any tinsel when I was shopping last night (it was the stress... of not being able to purchase all of the items on my shopping list...it has become a case of life or death importance...I went to a number of stores...but no luck...no fresh sage anywhere....where's the wisdom in that!). Anyway, in order to join in I have had to resort to decorating the alpacas.
Explorer was the chosen one...as Amanda so rightly pointed out...he likes wearing red!! If Explorer could put his own halter on he would...he loves showing off...he really does believe that he is Gorgeous...however when he saw the antlers he wasn't sure...I put mine on first...don't think that convinced him...I promised him that it was no loss of dignity and that Waradene St Patrick would be dressing up as a leprechaun come the 1st of March...obviously fearing that he might be out shone...the job was done. 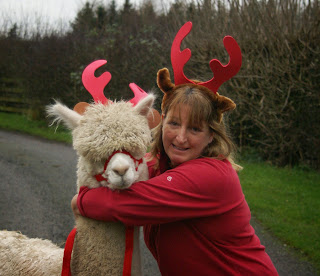 Beck Brow Explorer with some old fool wearing antlers.
Actually what I think did the trick was Quintos prancing about in his antlers...he is another show off and I actually had to take them off him or he he would have gone outside wearing them! We don't have favourites around here...but push Paul...and he chooses Quintos every time...there is something about boys that are particularly endearing...I have a real soft spot for Magellan this year...but of course they are all adorable.﻿ 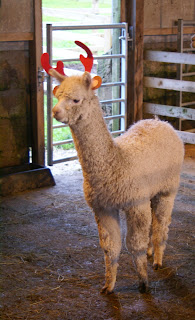 Beck Brow Quintos...a little dear!
As my blogging has been getting less and less frequent and ﻿my 'Chrismas things to do' list isn't complete I will take this opportunity to;
Wish you all a Very Merry Christmas!
Many thanks again to those of you who take the time to read this blog, be that as a follower or those who have accidentally clicked on the wrong Google link...it is much appreciated﻿!
P.S found some sage...in the garden...just don't tell Paul!
Posted by Unknown at 11:53