Mud, Mud, Mud...looking on the bright side it has me reminiscing about the 70's...their music was pretty bad...but can anyone remember the dreadful dance that went with Tiger Feet...and we all thought it was so cool at the time! Well, even worse is the real thing...MUD...give me a bit of snow and ice anyday. It has rained here for days and we have never been so muddy, but as I type the snow is begining to fall, so lets hope we have some reprieve from the rain for a while.
I have been a bit concerned about Boots...our alpacas normally stay inside when the weather is bad but even they get bored after days of rain, so have ended up going out...Boots always looks cold when she gets soaking wet...it is the way she hunches her back in the wind and the rain...I tried putting a coat on but it was wet and muddy in no time, and so only added to the misery. She is gaining around a kilo a week now so steady progress, and she does get tucked into the Camelibra, so she is doing okay.
I was concerned that Boots was looking a little stiff a few weeks ago but this seems to have resolved with injectable A,D&E. We have decided to follow the advice given by Karin Mueller and inject at a dose rate of 2000 iu of Vitamin D per kilo bodyweight, rather than all the cria getting the same dose. After all there is a massive difference in weight between our cria born in May and those born in late August. I know we debated paste versus injectable vitamins earlier in the year and we had some interesting comments. Looking back I am pleased that we made the decision to change; http://beckbrowalpacas.blogspot.com/2011/01/ad-epaste-or-injection.html
All of the the herd have also had their selenium and Colbalt drench. We are back using Maxigro, it does have to be given more frequently than some supplements, but as it is very well tolerated this isn't a problem. Our next job on the list is winter worming...yes we are later than normal...we have been waiting for a day when the alpacas are dry...we have been waiting a while. Actually we have now decided to leave it until next week...we know we don't have a worm problem as we do our own testing on a regular basis...and it now makes sense to worm the herd when the cria are weaned, and the cria are at their most vunerable. 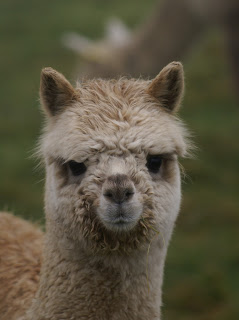 A rather damp Boots...Amanda always comments that she (Boots that is) is rather cat like in apperance...I can see it in this photo...I think it's the ears! 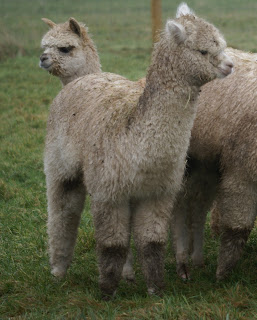 For all those who wonder how I keep our alpacas so clean...I give you Synergy...we have lost the battle! 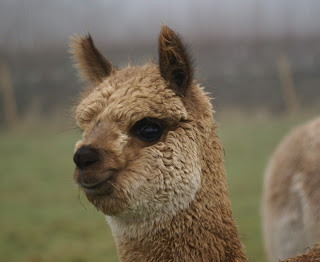 Now mud does present a strong argument for breeding brown alpacas...Finesse still looking spotless...if a bit damp!
I have actually finished fleece sorting...I can't tell you how good this feels...﻿I feel like I should be cracking open some champagne...unfortunately having just worked out the cost of processing...I think I had better leave the bubbles in the cellar. Talking of which I decided to give it a clean out yesterday (the cellar)...whilst I nip down there pretty frequently...yes we do have wine stored down there...but it also houses the tumble drier and freezer...I think it might have been a while since it was cleared out...the newspaper lining the shelf was dated 2000...much older than any of the wine I found down there I can tell you!
Posted by Unknown at 14:14