Fine Fleece and a Hairy Journey!

We had already made plans to travel the four hours to Banbury﻿ to the Specialist Spinning Company today...no way were we going to be put of by a little wind and rain...okay maybe I am playing it down a little...it was blowing a gale (up to 70 mph) and sheeting with rain...my poo picking acquired muscles were put to the test as I tried to keep the van from weaving across the lanes of the M6.
Now I know some of you in the South might be complaining about the weather... having travelled down country the best you can have is "a bit grim" we are taking "horrendous" in Cumbria...and as for over the border...well I can only imagine.
Paul joined me on the journey...I was glad of his company...not for the conversation...he doesn't do 'girl's talk' (or even alpaca chatter for more than 30 minutes)... but because I am obviously not safe to be let out on the roads alone;
Paul; "No...left hand lane...it's a roundabout...do you not understand roundabouts...indicate"!!
Paul; "What are you doing"
Me; "Following the satnav"
Paul; "No go right"
Me; "It says left"
Paul; "It's wrong...pass me the map"
Satnav; "Turn around when possible....turn around where possible"
Despite all we arrived in good time with 400 kilos of fleece.
I had decided to make the trip down as I wanted to discuss our needs in person. We require our yarn to be spun very finely, but also fairly tightly in order to be strong enough for weaving. There were a few tuts from the boys when I said we wanted coloured yarn spun so finely...however as I handed them some sacks to dip their hands into...they quickly changed their opinion...obviously they were not expecting the fleece to have the fineness of the white....however we don't want to compromise on the grade of fineness whatever the colour of our fleece...and are very strict with skirting...which was commended. We now just have to wait to see the results...just slightly scary! 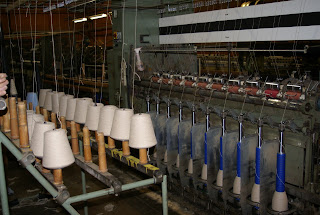 The machinery used for plying after spinning 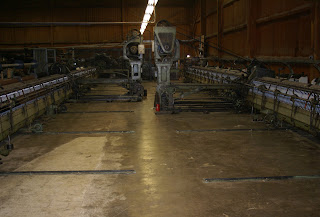 The photo is not very clear but you can hopefully see the tracks...a five foot draw means that the yarn has a finish that is as near that of handspinning as you can get...much more successful for alpaca than short draw equipment I am told.
The alpacas are all tightly tucked into barns and shelters...we obviously still have electricity...with overhead lines I expect we will be lucky if we keep it much longer...torch batteries charged...and candles at the ready!﻿
Posted by Unknown at 20:42