We seem to be spending a lot of time considering our alpaca group dynamics at the moment...we believe that this is key to a happy, healthy herd...at the end of the day some alpacas like each other and some...well...lets just say you don't feel the love. Take our two wethers; Nimrod and Julius, for example. It would be cruel to separate them they adore each other...so they are together...with Beck Brow Explorer. We decided to put Explorer in with the wethers in the hope that it would 'bring him on' rather than have him subservient to the stud males...he is also next to open females...we are really hoping he will be ready for work in the spring...exciting!
The stud males have been moved around a couple of times already since mating finished...once was accidental; due an open gate...but that seems to have worked well. As we suspected it is Anzac Almost Illegal who does not know his place, and hence causes the fighting. Anzac Hollywood's Attitude is behaving impeccably in with Legacy﻿ of Purston, and our Suri wether; Prince Snowstorm (better known as Snowdrop...yes Paul's pet name since he got castrated...the alpaca not Paul that is...you know what I mean) 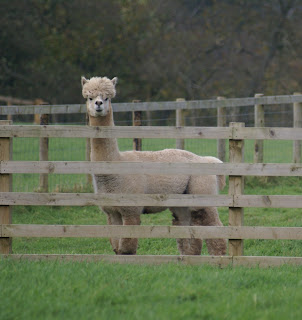 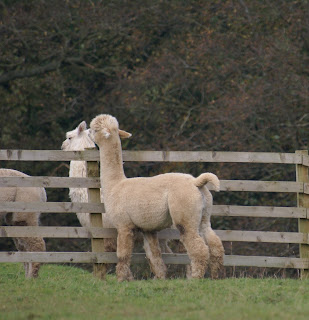 Anzac Almost Illegal...absolutely criminal in fact...and no picture of innocence
So, Warandene ﻿St Patrick and Almost Illegal (Almo) have been separated again. I had planned to hold my nerve and let them fight it out...St Patrick is obviously in charge but Almo just gets too cheeky every now and again...when blood was drawn I lost my nerve...so they now have a fence between them...and guess what?...they obviously miss each other! 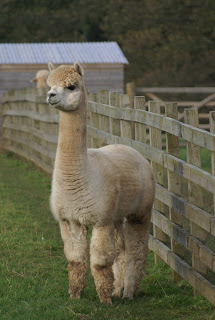 Waradene St Patrick of EPC....thinks that he is top dog 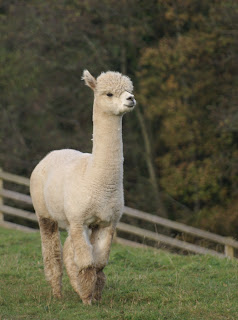 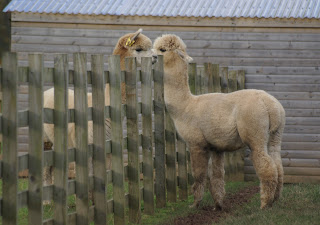 Sorry!...missing you x
Another move has been Phoebe (who belongs to Robyn and Craig). She has been moved in with 'Jim's girls' (yes we still call the auction girls Jim's﻿). Phoebe is a bit of a stress head and is very underweight (in addition to still having skin problems despite trying everything known). The idea was that we could control her feeding better in a small group. She is unfortunately usually an 'unpopular alpaca', which ever group that she is put in. However Biba does seem to be rather taken with her (I think the 2 white girls had previously been in the same paddock and were already bonded leaving her as a bit of a Gooseberry).
The other group dynamic we have been analysing is Metisha and Adelle. We put a lot of consideration into where to put the latest arrivals and decided that they definitely needed to go into the Mum and cria group. And as we didn't want to split this formed group, she went in with 12 females with cria at foot.
However Metisha obviously does find our herd behaviour a bit strange...coming into the barn all the time...staying in after breakfast for an hour or so (some even fall asleep...she was glaring at Galaxy this morning asleep with me just wandering around her)...and then Lady Gaga (whom she originally liked) always looking to eat out of hands (she is allowed extra rations)...what is going on. Hence, she does come in for food but likes to go straight out...which has meant that she has upset the equilibrium a little...but they are starting to settle down again. We are trying to keep handling to a minimum until we gain her trust.
All alpacas are so different. We have introduced 29 alpacas (mainly 1 or 2 at a time) into our herd in under 3 years (3 of those are now owned by Robyn and Craig) so we have had a bit of experience!. I was wondering if being a first time Mum was making things a little tense for Metisha, but looking back Katkin, Phoebe, and Baheti were also new mums. Maybe it's just our northern ways...anyway she is getting used to us all.
I was looking through our herd details for similarities, when it occurred to me that we have a really young herd at Beck Brow. We have 42 alpacas registered and only 7 of those have a date of birth before 2007...Legacy (14) must be in his element... Hugh Hefner move over!...however Metisha is in with a mixed age group and is in with Holly who is a very calm and kind matriarch.
I have had to stay home today...I had planned to help at The Scottish Fleece Show...but Paul was getting a hire car delivered (work related) and I needed to be in to sign for it...I rang him to tell him that it had arrived;
What is it? he enquires
A BMW I report back
Yes but what is it?
Blue I tell him...
Well...four wheels don't interest me...four legs do...what I did notice is; it isn't 4-wheel drive...and it is hired until the end of February...lets hope we don't get any snow...or the air will be blue...I suspect that he won't get very far from home in bad weather!
Posted by Unknown at 18:35