Earlier in the year we decided to separate our nursing females from the maidens (and those who had been left empty). Last year we found that the amount of feed required to maintain good body scores for the nursing, pregnant mums (especially when we had snow this time last year!) meant that the maidens ended up getting rather obese.

Well it has worked... we have managed to slim down some of our rotund girls... with limited pasture, plus ad lib hay, and hard feed of Camelibra and Fibregest...they are looking much improved. Happy that they are scoring somewhere around 3.5/5 (with the exception of Pebbles (4+) I have moved them on to more grass ready for the winter (still no peas and beans...just the nursing mums get additional rations at present). 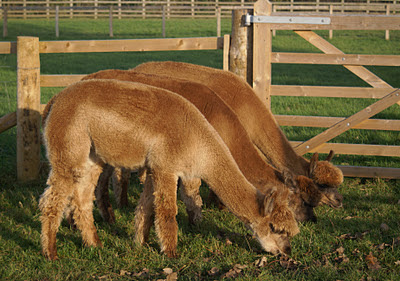 Parisien, Bahati and Willow enjoying the fresh grass.
Of the females in the photo; only Bahati still belongs to us...Parisien and Willow are both sold and are on livery at Beck Brow...strange how for someone who wanted to breed fawns...I keep selling them and buying whites...I blame Beck Brow Explorer...he has made me diversify!
Talking of Explorer; Jeff did ask why no photo of him on my last blog...well the reason is...despite him being my favourite alpaca (okay I am like Brucie, I have more than one favourite)...I have to admit he doesn't take the most interesting photo...he doesn't do silly things...he doesn't get over excited...he doesn't like to loose his dignity...he just likes to pose... like he does in the show ring: 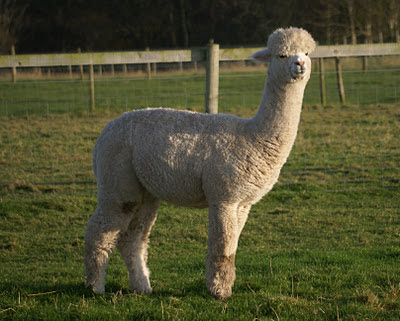 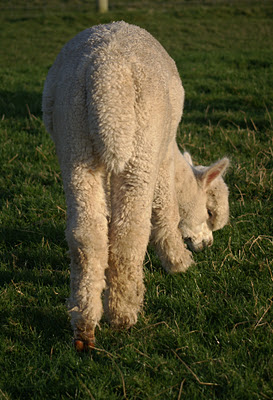 Most of the time he poses and the rest of the time he eats...very interesting?
Although what is interesting about him is the amount of crimp he has on his chest...it is more obvious with his second fleece...and really isn't much different to his blanket...his consistency is amazing (I of course am not the least bit bias!)
You may recall that Nimrod was left with a rather 'floppy' hairstyle after shearing...it went through the Beatles mop top look, then it went through a Hugh Grant stage... 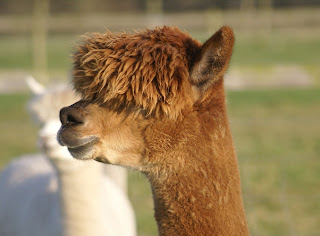 But just as I was thinking that we really need to get the scissors out ... 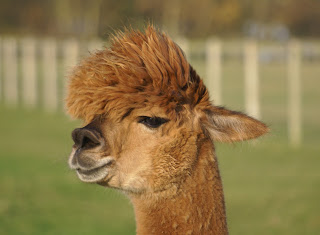 ...he goes for the James Dean look...Nimrod the Dude!
I am still having problems getting Phoebe's skin sorted, she seems to be allergic to everything...I am making it worse I am sure...I am going to see if it will settle down by it's self﻿ (she had a course of antibiotics so I am not worried about secondary infection at the moment).
However I have had real success with Hoity's eyes at least. She has had problems since contacting mites last year...the skin remained swollen and caused her numerous problems...everything has been tried (including Ruggles) with limited success. However I have made a cocktail of Mange Mud available from Everyday Solutions http://www.everydaysolutionsrx.com/mange/    mixed with Filta Bac (just to make it easier to apply around the eye area)...the difference is amazing...the swelling has completely gone...and the skin is looking so much better...as it predicts on website...within days!
Posted by Unknown at 17:21