After a damp and foggy weekend, we woke up to a beautiful crisp﻿ morning today. We did have some light frost overnight, but nothing that that required the gloves to be hunted out (remember we are hard up north!). St Patrick looked very seasonal I though, with the autumn leaves behind him (even if he is a little damp from the frost)﻿ 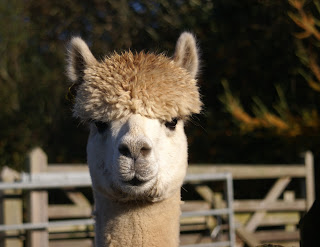 Waradene St. Patrick of EPC...no girls Patrick...he is always on the look out
The damp foggy weather did rather spoil the fleece rummage on Saturday, but we did have expert rummagers, so they managed to see through the ﻿bedraggled look. We had been looking forward to a visit from Jenny and Graham from Fowberry Alpacas in Yorkshire, unfortunately my normally immaculate alpacas were not presented so!
It was non-stop alpaca, with out any apologies for never straying from said topic...just as it should be! We were interested to see what Jenny and Graham though of our EPC Top Account of Fowberry progeny, and were pleased with their assessment. It's all about waiting to see how the cria grow out now...patience... a prerequisite to alpaca breeding!
One such cria is Beck Brow Quintos. He is packed to the brim with elite genetics but has a rather unusual fleece. It is dense, it is consistent, it is the brightest white...and it has the character of a Suri!...very unusual, slightly waxy feel but with the most amazing lustre...just not the crimp style you would expect. My guess is that he will be something special...I do hope so...because he already rates himself highly...just look at him at the poo pile: 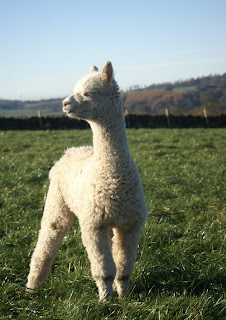 Beck Brow Quintos
The cria appeared to have a mass urge to frequent the poo pile at the same time today...it certainly is a loo with a view:﻿ 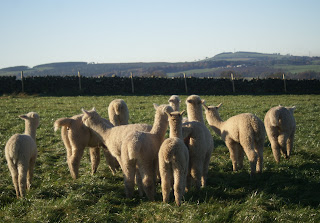 The cria choose a loo with a view
They did all seem to be enjoying the sunshine on their backs after the damp weekend. Here is Bonita looking very chilled out (with Sophie her cria who is nearly the same size﻿) 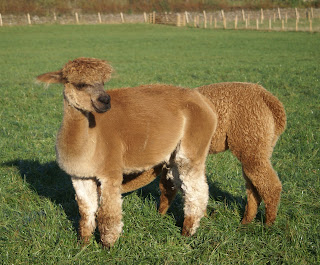 Bozedown Bonita
Due to a lot of socialising over the weekend I hadn't spent as much time playing (I mean working) with the cria as I usually do, so it was lovely to be greeted with lots of snuggles today...it looks like Boots has forgiven me for the bottle episode!
I have just been proofing the new e commerce website for our Beck Brow Alpaca Wear range...so far so good...I am sure it was my plan to have something ready for last Xmas...will I make it for this one?...if not definitely the next one...I REALLY must do some more fleece sorting or I won't have any stock that's the problem.
Posted by Unknown at 17:08