We have been enjoying the sunshine here at Beck Brow...we don't always get our fair share...so we do like to make the most of it. I have managed to get some fleece skirting done. With the sorting table in the orchard, I get a sun tan (T shirt tan), and have much better views than when stuck in the barn. It always takes me ages to sort my own fleeces as I spend so much time analysing and making potential breeding decisions, when I should just be getting on with it.﻿
Anzac Hollywood's Attitude, our light fawn stud male, cut a very heavy fleece again this year (3.2kgs blanket only ). He was mated with Silverstream Hoity Toity last year, who has an incredibly heavy fleece for a female (2.9 kgs blanket only). I am now wondering if we will be getting a big fawn teddy bear some time soon? Hoity is white, but Hollywood has so far only produced mid fawns from white females, so fingers crossed...a fawn female would be good Hoity!
Hollywood's latest cria; Magnum is coming along well. He is so inquisitive and loves the camera. Blanche, his dam is very protective, but he is quite independent...even allowing Velvet to kiss his nose this morning. 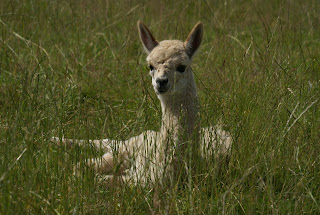 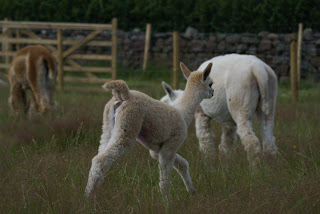 .... Independent until feed time
Poor Hollywood hasn't had many matings here this year. I did mean to share out the girls a bit more fairly but the temptation to use St. Patrick just gets too much. Almost Illegal has been allowed a couple of girls to show us what he can do (he has an incredibly fine third fleece...I believe that his sire Cambridge Storm Trooper has remained very fine, and received a Supreme Championship at 10 years of age). He has had matings with Holly, Pebbles and Bonita (oops three isn't a couple). 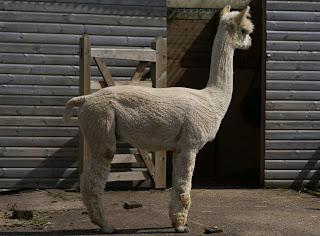 Anzac Almost Illegal...strutting his stuff.
The whole herd have received their ﻿selenium, colbolt and vitamin drench this afternoon. We were helped by Willow's new owners, who are keeping Willow here on livery. The plan is that she will stay until they build up their herd, and also find the right property. This also gives her new owners the opportunity to learn all about alpaca husbandry, their health and welfare needs, and to get to know Willow before taking her home. I wasn't really sure whether Willow was going to be for sale, but she just seemed to be exactly what they needed. She is very easy to handle, sweet natured, pregnant to St. Patrick, and she gets to stay a bit longer...perfect! 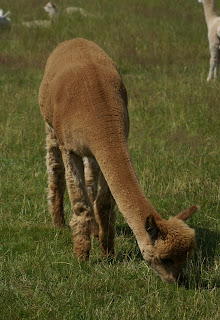