Justifying the call out fee...

Earlier in the week I had arranged for the vet to come out today to have a look at Katkin's abscess. I just didn't feel that it was clearing up properly and wanted a second opinion. So she is now on a course of Excenel to see if that does the trick. The vet has come to the conclusion they Katkin has an allergic reaction to Cydectin, so we will have to rethink what wormer she has next time.

I don't know if Katkin wanted to warrant the vet's call out fee, but she came in this morning on three legs. The vet had a quick look and declared it to be a 'pot hole' sprain. No treatment required (incidentally she was not keen to give an anti-inflammatory (Finadyne) when she has the abscess as this could impair the immune response).

Whilst the vet was here we were discussing Rumour. You may recall that she has born with a very stiff neck from being badly positioned in the womb. She still holds her head to one side at times, which gives her a somewhat quizzical look. However the vet is confident all will come right as she grows and the neck muscles strengthen. 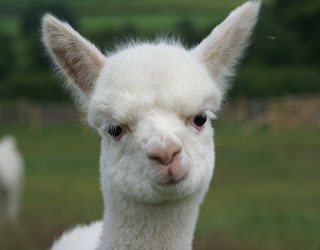 Beck Brow Rumour Has It...a quizzical look!
Despite Blanche looking the size of a house she was not showing any signs of unpacking, so Craig and I decided to pop along to Penrith Show field to do some preparation for tomorrow. The grass has been cut and the gazebo's have been popped up (pray for no gale force winds!). That will give us at least an extra hour in bed tomorrow morning we reckon. Paul is again staying on farm duty...much more up his street...topping is top of the list. We have had our hay field cut this afternoon, so fingers crossed for fine weather for the next few days.
We have a full day planned for St Patrick on Sunday with mobile matings, so I expect that I will get no blog time over the weekend. Hence I made an effort to get some photos taken today. 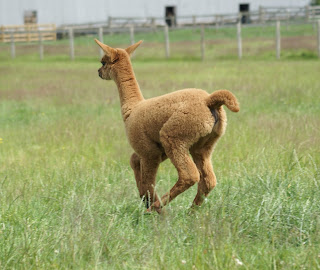 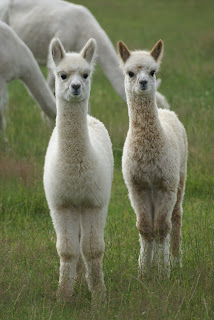 Young Punk Annabelle and Beck Brow Max
Does everyone secretly have a favourite cria each year? You try to pretend it isn't the case, because of course they are all lovely...but someone just has that something...well if I am honest...I am a little smitten with Magellan. We bought Inca Van Dieman Chaska (medium fawn)  pregnant to Neptune of Houghton (light fawn) and were rather expecting a fawn cria...but we got a white male...he has the sweetest nature...am I very bias or is he very cute! 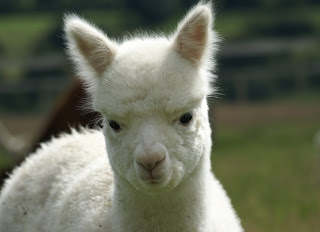 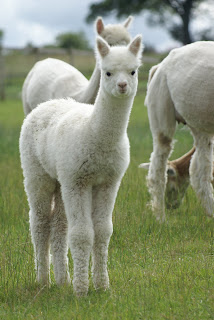 Beck Brow Magellan
P.S I promise to try to have some more exciting news for the next blog...but then again...
Posted by Unknown at 19:37