A busy weekend meant that I have been away from the farm for most of it, but Blanche kindly held on until 8.45 am the morning. A straight forward birth of another fawn Hollywood boy. 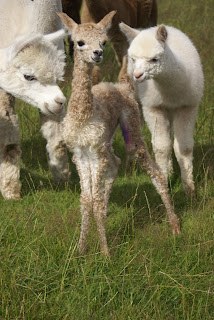 Beck Brow Magnum
Anzac Hollywood's Attitude has been amazingly consistent in producing mid fawns from white females (although Blanche does have a large fawn patch). Here is little Magnum being checked out by Alfie, who is nearly identical (and exactly the same colour of fawn as Max) 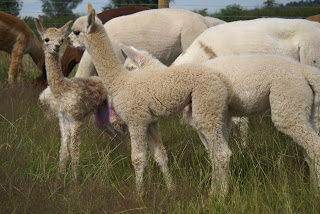 Young Punk Alfie with Magnum.
Sophie did rather break the trend. She is also a Hollywood cria but much darker. I caught her smiling in the sunshine this morning. I am rather excited to see how she turns out...she does look promising. Unfortunately I haven't used Hollywood much this year, as I was waiting to see how things went,  but I will remate Blanche (Magnum's dam) to him and hope for a female from her next year. 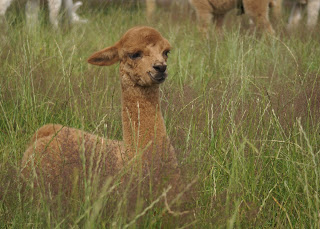 Beck Brow Sophie...plenty to smile about (Paul is behind on the topping!)
After a busy day at Penrith Show on Saturday with the alpacas, we were up early on Sunday for mobile matings. The plan was to get away by 6 am. It was in fact nearer 6.30 am. Thirty minutes down the road and Paul realised that the halter had dropped out of his pocket...back home...and take 2...we leave at 7.30 am. A major accident on the M6...and a diversion through the country side....an additional stop to ensure St. Patrick is feed and watered (due to the extra travelling time)...and we arrive for lunch rather than breakfast! Thankfully St. Patrick is very chilled and performed well. Next outing next Sunday...lets see if we can do bettter.
Posted by Unknown at 12:50