Photo shoot failure and a visit from Bailey Robyn arrived yesterday morning accompanied by Oscar (dog) and Bailey (cat). It sometimes feels surreal living here! Having decided to take the 20 minute walk from her house through the fields (in order to give Oscar a run out) she hadn't expected the cat to follow...a cat in need of therapy I feel!
Robyn had come to lend a hand as we were collecting blood for plasma spinning (this should have happened a couple of weeks ago but the vet forgot the bags!). All the alpaca doners were very well behaved. It was all very slick and the blood was in Manchester by lunchtime.
As I had picked Ben up from Salford on the way home, we decided that we would try taking some fleece shots using different lenses. Unfortunately even with three of us we failed. In fact it was even worse as we managed to get too many hands in the shots! It has nothing to do with the camera (the quality is good) it is just the ability to hold the alpaca, open the fleece and take the shot at the right moment, that is beyond us. Could this be a seminar for next year's futurity?
We had chosen Hoity Toity (HT) to practice on as she is not pregnant and is usually quite obliging... not today! HT is a girl that I nearly dismissed on phenotype without even looking at her fleece. She hasn't got that 'ideal alpaca' look and has a longer face than I would have chosen (I was also looking for a fawn). However after closer inspection I had to do a rethink. Her genetics certainly came through in her fleece. The brightness just about shows in the shot below although her fleece is very dirty. 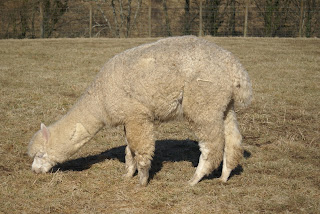 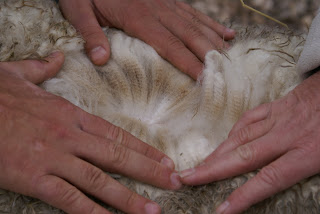 Fleece shot just visible between all the hands!