How very dare you? 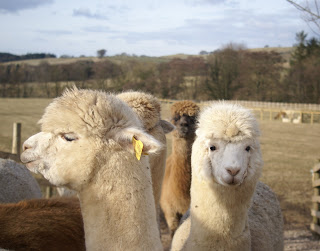 The last of Hoity Toity's results came back this evening. There was nil of note from any of the parasite tests...the VLA are probably asking why I didn't believe the previous two tests! However, as suspected her blood results did reveal her to be anaemic. Her Hb (haemoglobin) was on the low side with a raised MCV, indicative of a vitamin B12 deficiency. I was already convinced that this was a likely problem, as she had visibly perked up after having the B12 injection. No other abnormalities were found. She is now on a course of vitamin B12 injections. Lets hope this will see her on the up from now.
I did try the Ballottment maneuver on Camilla last night (see comments 21/03). I did manage to get into position without too much fuss and no bruises. I can't say exactly what I felt but if she is not pregnant then she has seriously eaten too many pies! I did the same action on Nina, whom we know not to be pregnant and the difference was pretty obvious. As you can imagine Camilla was very unimpressed. She manages to to do an indignant look like no other alpaca that I know. It is a case of' 'how very, very dare you!'