On Friday we received the results from the postmortem on poor little Wellies. The interesting thing about the report was more about what they didn't find, than what they did find. So much so that the AHVLA are running further tests at their own expense.

We had assumed that it was an overwhelming sepsis that had been the cause of death, and with the clinical sign of a stiff neck, this was assumed to be meningitis. However, the only bacterium isolated so far has been identified as one not previously associated with clinical disease in alpacas. The only real find at this stage is a dramatically swollen bladder, with clots of blood present in the urethra. What we do not know is if this was a primary or secondary problem. The only abnormality on the blood results was a raised urea at 17.90 (normal range 3.9-10.2). Raised but not at the level you would expect of chronic renal failure (and no rise in creatinine levels which normally go hand in hand in renal failure). Of course urea is produced as a by product in the breakdown of protein, so it may just be a result of not feeding. The next step is microscopic tests on the kidneys to ascertain if there may have been a congenital component. We wait with interest to see if any further light can be shed, but I do feel reassured that we didn't let him down by missing something obvious.

Ladida had her plasma transfusion on Friday. As the vet went to insert the cannula he kept repeating himself..."my god she is tiny"...but she sat on my knee and made no fuss at all...I am truly smitten! She has ears like a spaniel... we have taped them up but she still looks like Droopy. No weight gain nor loss this morning. However, daily weighing has picked up that Ludo was losing slightly every day. Checking on mum Lucie she is rather short of milk, so we have been supplementing him with a bottle (just 200mls x 3 daily) and his weight is on the up.

I can never over emphasise the importance of weighing cria. We weigh daily for the first week and then decide on the frequency of weighing depending on how the cria is doing. Today was a weekly weigh in for the Beck Brow and livery cria. Boxster is the only one of our cria who is way behind on his weight gain (this isn't new he has never gained weight well) but he refuses to be topped up with a bottle. He does try to steal, but is a poor thief and never manages to successful get a drink from anybody but his mum (Bozedown Magic Charm).

I though I would share some photos of some of the livery cria, who are becoming much more friendly. Even the mad black one has calmed down, so much so I feel I can name her...without it been in an ASBO kind of way...yes, Zola lets us weigh her cria. Actually now that I have spent a lot of time trying to understand her, I think she was aggressive when she was frightened. I have gradually gained her trust and today when I was treating her skin she didn't even struggle never mind spit. You get what you give with alpacas...that's just one of the things that makes us adore them! 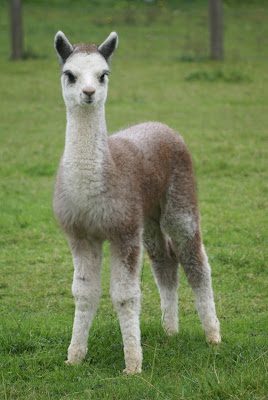 Look at those eyelashes...Maradadi is such a sweet girl, only three weeks old and full of character 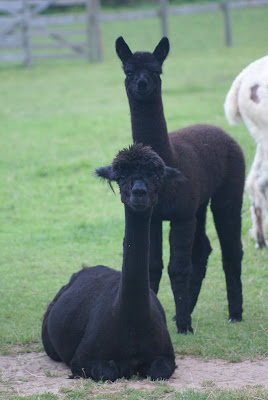 Thanos is a Black Sabbath progeny...and a little stunner...he always looks like he is smiling too. 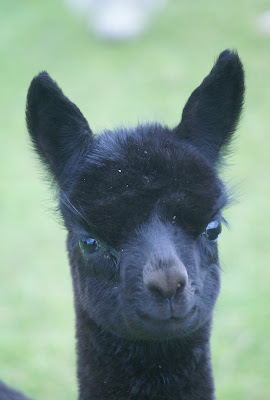 Indomitable (sire Prophecy)...luckily mum Zola has decided he may be weighed and he is doing well. 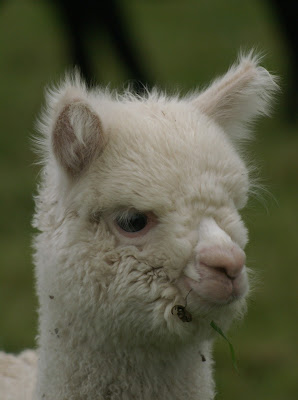 How cute is Bonnie Lad?

Only two more Beck Brow birth's to go. Adelle is 383 days gestation today...isn't it mad...we have Ladida born at 310 days gestation and we are still waiting for Adelle...73 days difference...it is impossible to plan your calender around alpaca births!
Posted by Unknown at 19:06