Well another week has gone by and I still haven't got to the hairdressers... and Chaska still hasn't got round to give birth (379 days gestation today)...actually there is a direct correlation between the two, but as a number of other females are now within their due dates it looks like I am going to be grey until September, even if she does have it tomorrow!

The weather is glorious and like most farmers up and down the country haymaking is in full swing. All being well we will have 15 acres baled up tomorrow afternoon. Some of the pregnant females are finding the heat a bit much, depending on their colour. The herd was split into three groups this afternoon; blacks and dark browns in the shelter, fawns by the water troughs and whites sunbathing in the middle of the paddock! 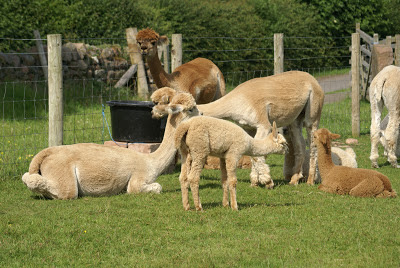 Below is a photo of Beck Brow Inkster, a beautiful blue black who has decided he rather fancies being grey! Inkster is our only Viracocha Black Sabbath progeny born so far...Pebbles is 356 days gestation today so hopefully not too much longer to wait. Black Sabbath will be coming up to Cumbria on the 21st of July and we are very pleased to announce that he will be staying permanently at Beck Brow Alpacas, as we, along with Florens Alpacas (Amanda) have bought the share previously owned by Anzac Alpacas. Having access to him all season, and not having to isolate him each visit is going to be much easier for us. He will have some traveling companions for his journey up north (I wonder if I got hypnotised...must be worth a shot to cure this addiction) 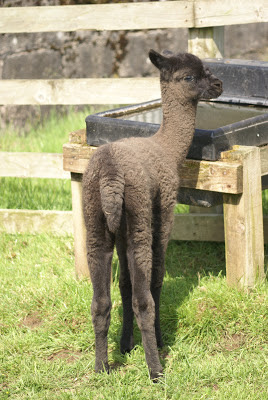 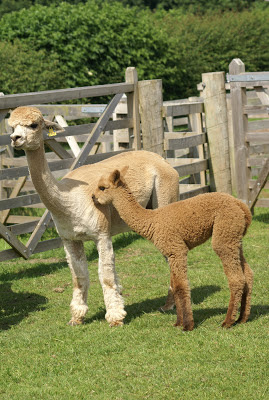 Bozedown Magic Charm and Beck Brow Boxster...I am thinking that the brown boy might actually be dark fawn!

Although we havent had any cria ourselves we were delighted to hear that High Winder Alpacas have had a St Patrick brown female from a fawn dam. St Patrick is proving to be very popular for stud services, especially with those wanting to increase depth of colour.

On Saturday we took three of the boys to Skelton Show along with some products. We had a great day with lots of interest in the alpacas (Kate Humble has done a lot for the alpaca industry!). Two of the boys are now sold and the third we are keeping (Explorer's half brother). We were rather surprised when we heard that we had been awarded the best medium sized trade stand and were given a plaque to display. However, we were even more delighted to hear that we had won the Championship Cup for the best stand in show...as I have just had to return Explorers Supreme Champion trophy to Westmorland it is great to have some silver wear to replace it! 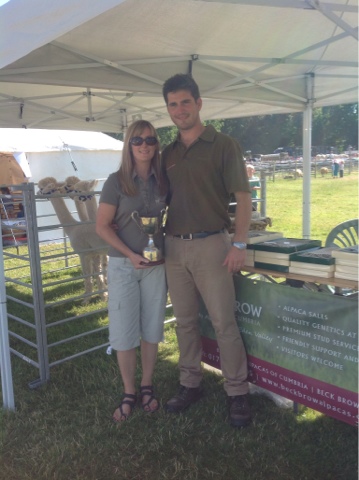 Robyn and Craig at the end of the day at Skelton Agricultural Show (10,000 visitors)

The lovely EP Cambridge Lady Gaga and Beck Brow Snooty Boots have had a modelling assignment... some archive images of Gaga with Boots as a cria, have been used by Master Sculptor Ray Ayres to construct a model of a dam with cria at foot. Ray works for Border Fine Arts who will be charting the progress of the model on their Facebook page (Border Fine Arts Classics).
Posted by Unknown at 17:08