We have had good news and bad since I last blogged. Thankfully the good out weighs the bad, so I will sandwich the sad in the middle.

Firstly an update from the weekend's drama; Camilla's little daughter has never looked back, she is full of energy and has gained weight at a steady pace. She is so adorable, even Paul is smitten...he doesn't go as far as saying that she is 'the cutest thing ever' as is my description... but he did say 'she is a little character, I'll give her that'...now those who know Paul will be aware that he doesn't do compliments... so that is pretty good!

I did say that I was thinking of naming her Cotton Bud, this was because she was white and fluffy...well I have had a change of mind...not just because Robyn didn't like the association with ear wax...but because she is beige...more used cotton bud colour! She has now been named Sugar Babe...just because she is... 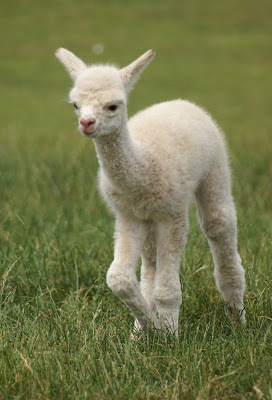 It is also good news on Summer Haze , who had the plasma transfusion. It did take her 24 hours before she really got going, but she too has been steadily gaining weight. She is suffering a bit with the very hot weather having an extremely dense fleece. She does seem to favour the long grass where she can get some shade. 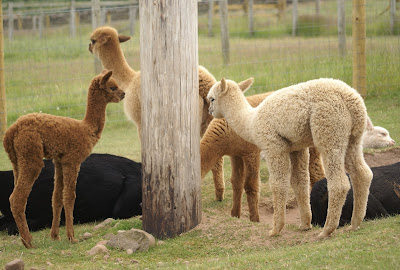 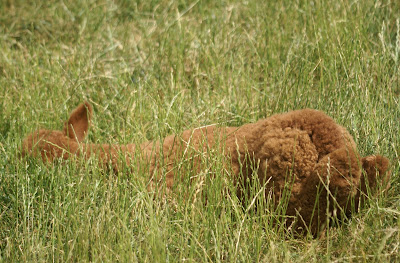 Summer Haze getting some shade from the long grass

I will put the sad news in italics, for you may want to skip this bit.

It is another case of an over long gestation unfortunately. Nina who belongs to Amanda was 377-days gestation yesterday, and as nothing was happening here I decided to pop over when Amanda made the call to say that she had action. All seemed fine initially, then when she pushed something emerged that looked like the placenta. On further investigation I could feel the head and legs inside the balloon. I have seen strong membranes before but nothing like this. It was red (unable to see through) and tough as leather. It was actually difficult to cut with scissors. But we managed and released the embryonic fluid. Nina eventually, with some help during her contractions, delivered the biggest cria that I have ever seen. Even when the shoulders were out the body still took a lot of pushing out. He was very obviously a dummy cria.

The male cria looked like he should have been six weeks old with an extremely long fleece, however he couldn't stand on his own, being down on his pasterns and having general muscle weakness. We gave him an intramuscular vitamin B1 injection and tube fed him colostrum. He did eventually take some colostrum from a bottle and Amanda and Graham battled on all night. When I went this morning he hadn't really made any progress, in fact the opposite. His chest was rattling and he seemed to have some colic. I gave him antibiotics and an anti-inflamatory. We also gave him a soapy enema with a good result. We also got the vet just in case we had missed anything. She gave some selenium (for muscle weakness) and some buscopan (for colic) as well as ventolin (to vasodilate the airways). She was hopeful he would eventually pull through, but unfortunately he lost his battle at lunchtime. My guess would be that he had been too deprived of oxygen during or prior to birth resulting in multi-organ failure. Poor little man.

I arrived home from Amanda's just before 10am (feeding time for Blue) to find Rumour Has It in labour. She is a lovely little maiden who shares her dam with Explorer. Thankfully it all went like clockwork and she delivered a healthy beige male...11 v 4 to the boys...I thought we had turned the corner but no! 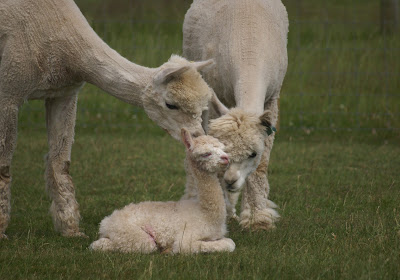 Whilst all this was going on I had a call from Carole at Prince Bishop Alpacas to say that Crystal had gone into labour and no legs had appeared. Thankfully Carole managed to tease the feet out and Crystal has produced the first female Explorer cria...a whopper for a maiden at 9.1kgs...and from the photo a very exciting prospect.

We also had good news from High Winder Alpacas last week when Katie (mid fawn) produced a brown St Patrick female...well at least some folks are getting girls!

On the boys front all the boys from 2012 have now been sold (with the exception of Advantage - Explorer's brother-  who we wish to retain). Testimony, Shackleton and Paulo are all going to their new homes as potential stud males. It is going to be tough to let them go, I always get too attached to the yearling males that we hang onto until we see their second fleeces.

Well best go and check on Rumour's wee fella. I never seem to get out of one field or another and look like I have been abroad...oh how I wish I had been lying around!

A couple of photos to finish with; Beck Brow Eddie initially admired for his bright white fleece has decided he likes the sand pit and is no longer white...he is looking and acting more like his sire Explorer everyday! 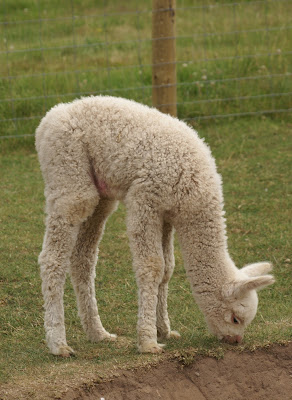 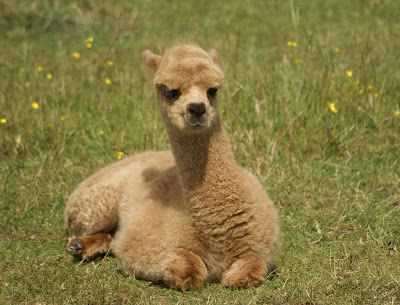