Just too good to resist...

Many thanks for all your kind get well wishes...I am still not well, but getting better...one thing for sure... I will be first in that queue for the flu jab next year (NHS staff perk!).

Thankfully Paul is not employed in the caring profession, as I would be concerned that his job might be in jeopardy...not his skill set I would say...I guess that's engineers for you! I am fortunate that Ben has been home and is a great help. He may have even saved Paul from me having to seek revenge when better. FLU...Paul...FLU...not some bug!!!

Anyway despite being in my sick bed, I have managed to break my only resolution for 2013. It was an unspoken one, for I know no one would have believed I could keep it...but only lasting until the 10th...that's ridiculously poor!

Some of you will have probably guessed by now...yes I have purchased another female. Actually it is a 'we' rather than I, as not only did Paul take the call from my mobile, but he was in full agreement, and did the deal.

I have strict criteria which has to be met before females are considered for our elite core herd. Since our initial 5 females, who came with cria at foot, all of our subsequent purchases (15 to date) have been maidens (Easter-Wood Metisha did come with Adelle at foot but was up for sale as a maiden...she just had Adelle before I had sealed the deal! ) With unproven females I rely heavily on BAS and AAA registry details in order to study the depth of the pedigree, and to research their sibling's achievements etc. For example the daughter of a dam who has consistently produced top quality progeny, would certainly be on the agenda.

My theory is that the opportunity to purchase top quality, proven females, doesn't happen all too often (once they have proven themselves to be excellent, they often don't make the for sale list) Thus, I prefer to take the gamble that the maiden female lives up to her pedigree, and produces something very special (i.e Beck Brow Explorer!)

So, that all said...not only have I broken my resolution...I have broken all my own rules! Our latest addition isn't a maiden...she is in fact five years of age. She has had four cria...one waiting to be weaned and three others...three progeny who have all won colour championships...including at the British Alpaca Futurity...too good to resist? We thought so too!

Oh, and this one wasn't bought for Explorer for a change. She will actually be getting a date with an outside mating...a match that produced an outstanding female...one which we will be hoping we can repeat!

I will reveal all when she gets delivered, after our holidays next month. In the meantime here is a little clue... 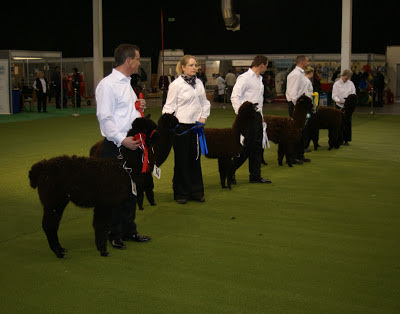 The Junior Black Male class at the British Alpaca Futurity 2011...is Karen the only one paying attention (the mention of Karen might be a red herring...or maybe not?)

It's probably just as well that we have decided to give another 10 acres of our land over to the alpacas. The fencer has been booked, and we are getting some quotes for a number of mobile field shelters.The birthing season just keeps getting more exciting!

Despite my flu ridden attempts to send out sponsorship opportunities, there has been a good response. Both Supreme Championships have been taken, so if you are interested in the Best of British please get in touch soon. Once I am feeling a bit better I will create a Facebook page and post our sponsor's details on there.
Posted by Unknown at 17:37