Thankfully, we have had a rather uneventful week this week so plenty of rountine tasks have been complete﻿d. We are having a spell of dry weather, which the alpacas appear to appreciate as much as we do, and makes everything much more pleasant (when I say spell; I mean more than two days in a row, that is a spell around here).
This also ensured that we had dry fleeces for the routine herd worming. Everyone has had Cydectin 2% with the exception on Katkin and Nimrod (mother and son) who had an allergic reaction to the drug last year, so have been given Dectomax again. We also got one or two toe nails done, but we have plenty more on the to do list (my least favourite job...I don't like human feet either...although I think the two issues maybe unrelated).
Magnum and Satchmo have been getting some more halter practise in before they go to their new home next Saturday. We are teaching them to walk together, which is going well for most of the time although they are getting a bit bored with the lane, so we had a trip down the yard this morning which was met with a bit more enthusiasm. 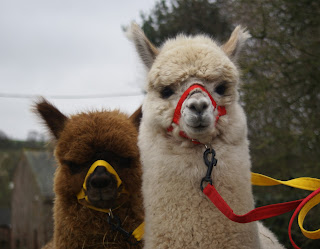 Satchmo (left) and Magnum...Satchmo is a bit smaller than Magnum but on this occasion he is standing downhill. 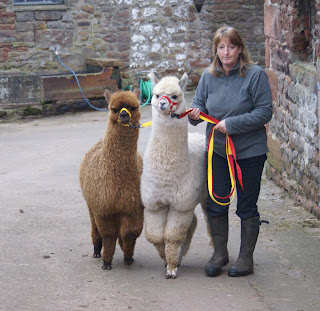 Magnum and Satchmo on a more even playing field in the yard (and someone not wearing their Sunday best!)
I have been updating our Alpaca Ease herd management system to ensure that their records are up to date ready for their transfer. We just have their vitamin injections to give and then they shouldn't need any interventions at their new home for some time.﻿
I have an interview in a couple of weeks for the part-time Staff Nurse position that I applied for (if I never mention it again I was unsuccessful). It is nearly three years to the day since I left a permanent nursing position (I have worked some shifts covering sickness and holidays...I am still fully skilled!) and I have surprised myself that I want to return after all this time (although as a Staff Nurse rather than Sister...less stress!). I am also fortunate that Robyn lives just around the corner otherwise it would not be possible.
I have also stopped dithering...I have put in another entry for the British Alpaca Futurity...so that is four...we are now discussing whether we will need to take the trailer as well as the van...I think the answer will be yes...he ain't gonna get slim in three weeks! Actually I think that we might manage, but as usual this would mean no room for a suitcase...we always come botttom of the list of priorities!
Posted by Unknown at 17:01