How welcome is this continued frost?...what a relief to be breaking ice on water troughs...honestly anything is better than all that mud. One slight disadvantage is the aroma in the air...eau de manure﻿...all of the local farmers seem to be taking advantage of the hard ground to have a muck spreading bonanza! However, the alpacas seem to be much happier and are now back sleeping outdoors...so at least there is less mucking out in the mornings.
We have been doing some more halter training with the second group of weanlings. Amanda came to give us a hand yesterday and they all did very well...Rumour managed to make it all the way to the lane end and back...only sitting down twice...I had already volunteered that I would take her into the show ring at the British Alpaca Futurity... before I discovered this talent of hers for just sitting down, in the most elegant of fashions, but for no apparent reason.
I have been teaching Magnum to be led as a pair, as requested by his new owner. Actually there was no training involved, he just does it, he is such an obliging wee fellow. 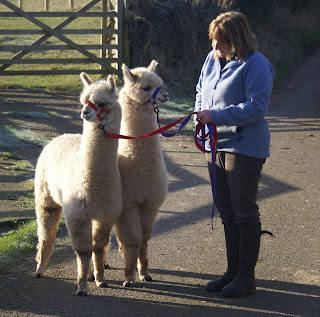 Alfie (left) and Magnum
I had a little moment earlier in the week...I had just completed the test for spotting the early signs of dementia

'Do you forget where you have left things? '

'Do you forget that you have done things and then accuse others of being wrong when they correct you?'

When I had reason to doubt myself. I had misplaced a rather nice Joules sweatshirt...annoying in itself...but it has a matching gilet...so doubly annoying. I had searched everywhere...to no avail. Anyway Robyn (daughter) turns up...I am looking at her sweatshirt...she has a few layers on but I can see it and it looks like my lost property...I question the suspect:

Anyway I have had it for ages (does this give her squatters rights? I think not!)

It would be too big if it were yours (Is there any need! Okay she is a size 8 so she may have a point)

I then nearly wrestle her to the ground... in order to look at the label in the back...it is difficult with so many layers...I even insist that she takes off her coat...and there it is SIZE 14...now I accept that neither of us is actually a size 14...but I am the closest, and it was bought knowing the benefits of Lycra...it is now in the washing machine.

I can't remember now...was over reacting to minor misdemeanours an early sign of dementia!!
Posted by Unknown at 15:17