Friday night at 5 pm I decided to set off on the four hour trip to Toft Alpacas near Rugby. Well my destination was to a Travel Lodge to be precise, ready for the short trip to Toft on the Saturday. It was a last minute decision to travel the night before, and I had forgotten why Travel Lodges are so competitively priced...GRIM would be my feedback.
The reason for the trip was to attend a study day on form and function, ﻿presented by Professor Brett Kaysen. The emphasis of the presentation was on conformation (after all this constitues 40% of the marks in the show ring) and it was great to really think about the alpacas without it being all about the fleece. Brett told the group about the findings of a study conducted at Colorado University into the heritibility of fleece characteristics in alpacas...the results were; that the inheritability traits were high, even higher than those of Merino sheep...however breeding out confirmation issues is not so easy...so much easier to put a good fleece on a well conformed animal when striving for that ideal alpaca.
Sunday I was out in the paddock checking that everyone deserved their place in the Futurity show team...using newly learnt terms like capacity, durability and fluidity...thankfully there are no issues...well not confirmation ones...fat ones...now that is another matter. Paul and I have been debating (that means Paul will not agree with me) whether Beck Brow Explorer should go to The British Alpaca Futurity or not...he is a multiple Supreme Champion so we could just let him retire...but that is not the reason for the indecision...Explorer is FAT...I have had to conceed...he is too fat to be shown at his best. We will slim him down for the summer! 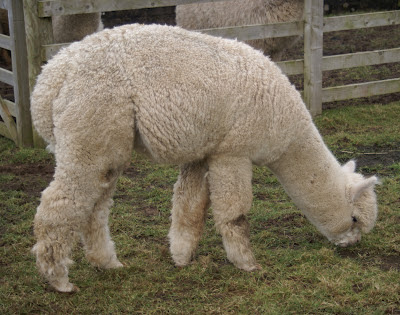 Beck Brow Explorer...he does have an awful lot of fleece...but he is rather tubby too.
Explorer has always been praised for his consistency when shown, and I think that this is even more apparent in his second fleece, hence the reason that I wanted him to go. It is just about possible to see from the photo below that he has crimp from tip to toe, even across his chest, and with no guard hair visable...yes I am bias...yes I adore him and it is mutual of course... He obviously missed me over the weekend as he actually snuggled in for a cuddle on Sunday....ahhh! 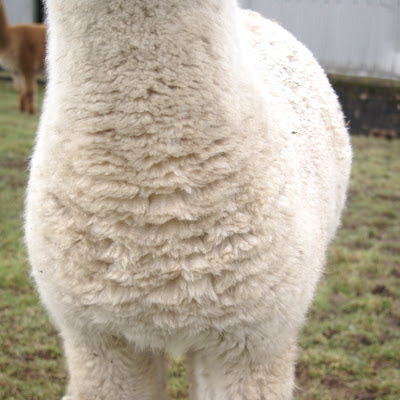 Beck Brow Explorer...producing a very consistent fleece
On my last blog I mentioned that Paul had been twittering about me bidding at the Futurity stud services auction...well it's good news and bad this week...I actually was the highest bidder on one of the lots last night...he is an excellent male at a very good price...the bad news is I need to tell Paul﻿...and pray that the female I decide to take falls pregnant first time...I will work it out nearer the time!
Posted by Unknown at 18:50