Back down to earth!

With adrenaline levels depleted after such an exciting weekend, we were feeling a bit jaded on Monday. When I say we﻿, I really mean Explorer and myself. The wee fellow was especially grumpy on Monday morning; grumbling away at feed time; grumble, grumble. All the attention; fleece inspection; and even fleece photo calls; had obviously left him pooped: I spotted him flat out in the sunshine mid morning, oblivious to the world.
Bev did ask if there had been any Explorer 'pouffing' at The National Show. Now, I did have my back to the ring for most of the time, but I do believe that he got his first placed rosette without a 'pouffe'. Unfortunately not so in the junior championship line up; it was a bulls-eye for the ring steward as predicted. Could be what got him the Reserve instead of Champion!
I have been having a little word with Cambridge Camilla today; letting her know how well her first born had done in the show ring. I did put in a little request for a similar (less grumpy) cria for this year please. She is pregnant to EPC Top Account of Fowberry, so we have high expectations of a lovely cria from them. 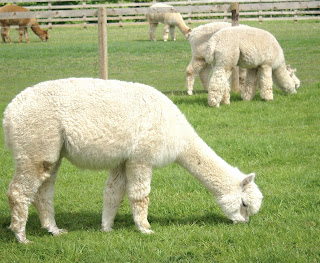 Cambridge Camilla...lets hope she doesn't keep us waiting so long this year!
I am now trying to decide what to do with Explorer who turns one year old at the end of the month. He is our only male from 2010. He is in with the other weanlings at present but it won't be long before he starts having thoughts of 'hokey cokey' and will no doubt become a pest to the girls. I may try him in with St. Pat and a couple of wethers later in the year. St. Pat is extremely non-confrontational and does occasionally get irritated by Hollywood and Almo messing about. 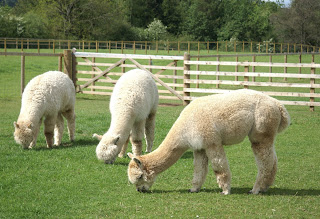 Almo, Hollywood and St. Patrick
The last photo is of Parisien, whom Robyn has renamed Bungle due to her resemblance to the teddy from Rainbow. She is so well grown we are considering mating her this year...I know I keep changing my mind on that one...maybe I should keep it zipped until I have decided!﻿ 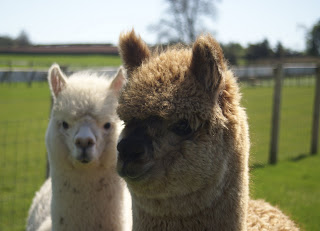 Parisien with Lucie.
Posted by Unknown at 14:43