Yet another busy week, I really must blog more often, then I wouldn't have to test my ability to recall what I have been up to! As seems to be the norm at the moment, I have been on the road rather a lot. On Wednesday I headed up north (yes it does get more north than us) to the Scottish Borders, to pay a visit to our weaver. I have brought back all of our yarn for a stock check, and then I will make some decisions on what to do next.

The latest throws are proving popular, with five sold in the first week. I have also ordered some more wraps (but these won't be ready in time for our Christmas fairs). We have also added a new talent to our knitters; Trish has come up with some great designs using the lighter weight yarns, and will also be coming along to the fairs with me. One day I might even get time to update the on line shop! 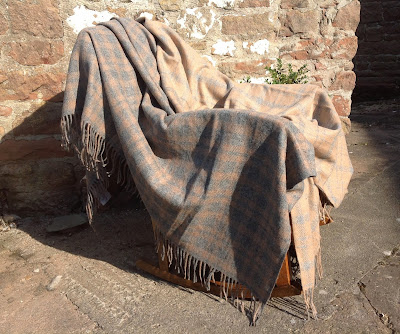 On Thursday I headed down South to Toft Alpacas, near Rugby. Rob and Shirley Bettinson are both BAS judges, and were booked to judge the Heart of England Fleece Show over the following two days. As I was apprentice judge to Rob, I was kindly offered a bed. It was lovely to catch up and talk alpaca of course. I really must thank Rob, for his teaching, and most of all for his patience...this was my last apprenticeship before certification and I was constantly questioning to get everything straight in my head. I had a great couple of days and saw some stunning fleeces (confirming my passion for white!!!). Thank you Rob and Shirley.

Unfortunately I couldn't stay for the actual fleece show on the Sunday...as I had arranged to collect Paul's birthday present before heading home. So it was, that I headed from Oxford, across country to the north of Bristol. Here I met Karen May of Amiryck Alpacas, Cats and Dogs...there is a clue there...not an alpaca but kittens!! Aster and Angel are absolutely adorable. Here they are sleeping on the settle with Angel giving Aster a hug. 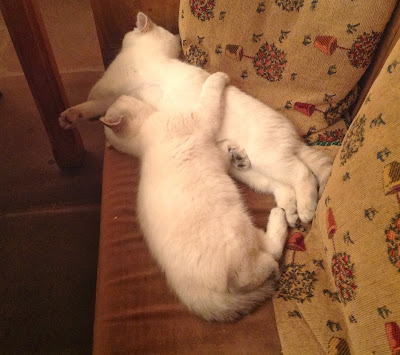 Robyn and I have been micro-chipping the cria over the last couple of days. There are a number of lessons to be gained from this experience:

1. microchip when very young...much easier and saves the expense of a box of Elastoplasts...yes, Robyn managed to stab herself twice whilst doing the older cria, who are more difficult to hold still.
2. if you are going to microchip a group of cria, do them all on the same day. Despite hating the task we managed to microchip two cria twice...Robyn was checking the list!

Must do better tomorrow when we finish off the livery cria (not literally finish them off hopefully... just the microchips!).

As a group of females (who had been here for on farm matings with Explorer) left to head home up north on Saturday; this freed up a paddock that had been providing an isolation barrier. So our girls had another lush green paddock to explore. As you can see from the photo, when I opened the gate the black girls headed off in one direction (the right one) and the whites in the opposite...so are black alpacas smarter or just greedier? 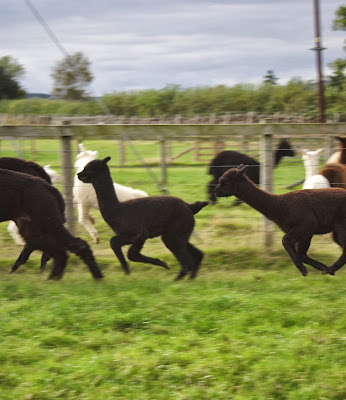 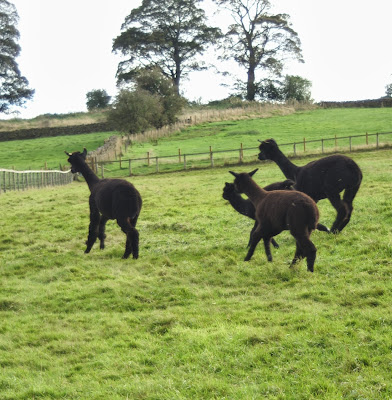 Not a white in sight!

I am ring steward on Saturday at the Yorkshire Alpaca Group show at Thirsk. Mary-Jo is the judge so hopefully I will pick up some helpful points for my certification later in the month. I think that I must have been to 75% of alpaca shows this year, as either an apprentice or ring steward. You cant get too much experience...I will however, pass or fail, be glad to get a rest over winter!
Posted by Unknown at 12:28