Yesterday we had a very early start (4.15 to be precise) as we were off to Westmorland County Show. We only live an hour away, but as organisers of the alpaca show we have to be early on site. Thankfully, all the exhibitors kindly heeded my advice to arrive in plenty of time, as the alpaca marquee was down a rather muddy lane with no turning point; reversing skills were definitely tested!

We took seven alpacas in total (six of our own and one belonging to Robyn and Craig) and all were placed between 1st and 3rd. The standard was high this year, with a number of the alpacas entered already having proven themselves as rosette winners at the British Alpaca Futurity. We only took white and fawns so were in some of the most competitive classes of the day. Beck Snooty Boots came a very credible second behind the eventual fawn female champion, with judge Cathy Lloyd commenting that there was really nothing between the top two, and that she would be very happy if both of them were in her own herd.

Beck Brow Explorer received his third Supreme Championship, having taken a championship as a junior, intermediate and now adult. The judge in her summing up praised him on his fineness, consistency, density, lack of guard hair and conformation...her conclusion..."a really stunning male what more can I say" (see it's not just me!!)

I had a lovely day, it is such a friendly show and it was great to catch up with so many breeders. An added bonus was Craig getting the sales man of the year award, for selling us out of all the adult knitwear that we had taken.

It was a day of reflected glory; firstly for owning Explorer and secondly for my choice of judge. Cathy Lloyd did a fantastic job, which was commented on by so many of  the exhibitors at the end of the show. It all ran very smoothly, and everyone knew exactly why they had been placed where they had. I think that we all came away having gained valuable knowledge about the strengths and weaknesses of our alpacas. 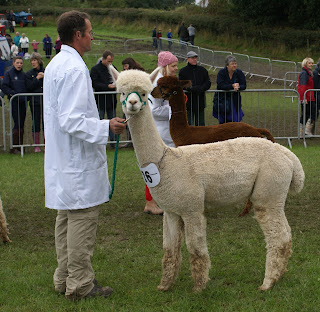 Beck Brow Explorer before taking the championship...he was having none of it when it came to posing with his sash on! 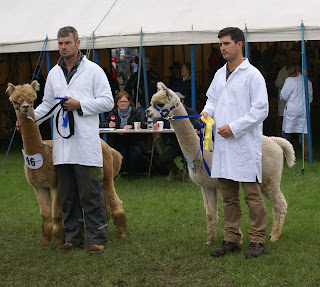 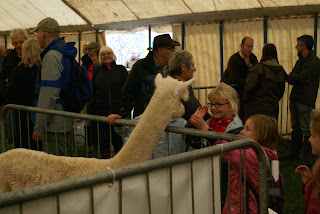 The alpacas pulled in the crowds...Quintos entertaining the girls 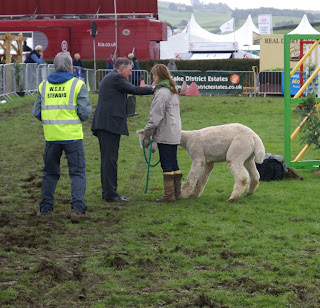 Beck Brow Explorer bowing to the President of the Westmorland County Show....Actually I think he might be saying "if you pat me on the head I'll have ya"...he is in fact supposed to be getting his photo taken receiving the trophy but he wasn't playing ball...it was raining though and he doesn't do rain!

Roma is still having nothing to do with the adorable Foxy Sox...thanks go to Amanda, and to Mum and Dad, who shared bottle feeding duties yesterday. Hopefully next year Sox will be joining us at Westmorland as part of our show team!