Well, we really are none much the wiser as to which of our females has miscarried. We did use Legacy to spit-off all of the females in the group, and every one spat, with the exception of 3 girls; who neither sat nor spat. The females in question are the two white girls that were purchased at the Blueberry auction; Nicola and Renata; and Beck Brow Pepsi Lola. We really didn't see the point in over stressing the girls (as two are obviously pregnant) so we will just keep an eye on them.

Looking back at our mating records: Nicola sat readily when first mated; Renata took a little more persuading; and Pepsi was never keen...so does that point the finger at Pepsi...I do hope not...this will be the first year that our 'home grown' females will be having their own cria...it does make it extra special.

For that same reason I was so pleased that it wasn't Beck Brow Lucie. Lucie's mum (Nancy) came to us at foot with one of the first three females that we purchased. We chose to mate Nancy with EPC Top Account of Fowberry and we were delighted when she produced such a beautiful female, who has now joined our core herd. Lucie, who has fawn in her pedigree,  is now pregnant to our own Waradene St Patrick of EPC. The resulting cria really will give us a chance to evaluate our own breeding decisions...it is a long process even without any mishaps! 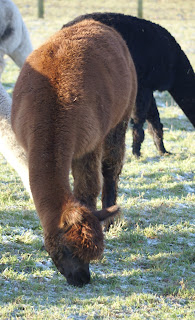 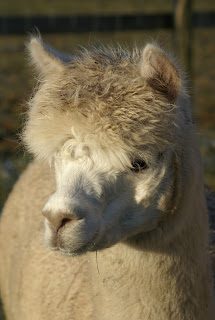 Beck Brow Lucie
We have had another lovely weekend...treating ourselves to the 10 course tasting menu at the Michelin starred Sharrow Bay Hotel, situated on Lake Ullswater. We went with Robyn and Craig having decided to make this a Christmas present to each other this year. We chose the option to have a different wine (half glass) to accompany each course, so as you can imagine we had rather a jolly time! Hence on Sunday we went walking in an attempt to burn off a few calories...unfortunately I don't think we quite managed to negate the previous evenings intake! Anyone looking to celebrate a special occasion I wouldn't hesitate to recommend Sharrow Bay. We have stayed at the Hotel on a number of occasions but this time decided to save some pennies by staying in a lovely B&B nearby, which we will definitely do again.

Lastly, I have had a complaint about my biased blogging...sorry Colin...I know that Velvet gets much more blog space than Tyke...but she is far naughtier...any way here is a photo of Tyke in his winter gear! 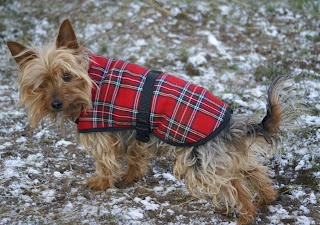 Tyke...who was having a few alpaca problems this morning...no one recognised him in his tartan coat!
I have just replied to an email asking for our opinion on the BAS magazine article featuring a local breeder who produces alpaca meat. This was the final paragraph of my reply:
﻿I really do feel that we will be doing a massive disservice to those breeders who have done so much to improve the standards of our national herd, and to our alpaca industry on the whole, if we are to start breeding alpacas with an eye on the dinner table rather than an eye on Saville Row.
All those in favour say aye!