Off to pastures new...

I suspect that someone might have been a little excited this morning...It is over nine months since Amanda's two females; Cambridge Caramella and Cambridge Stansted arrived﻿ at Beck Brow on livery. The plan was that Amanda would do a season as apprentice midwife before taking them home (10 minutes away). Two had turned into four over the summer with the births of Fendi and Satchmo, and Amanda was excited about having her cria at home. So doses of Selenium for Mums and injections of vitamins for the cria (they had already been wormed with Cydectin) and they were off. Bye girls!
Our new girls from the auction have settled in their own little group well...it still looks strange having a black one! The written results from the poo samples sent to the laboratory came in the post on Friday. We had been told that no treatment was needed, however, when we saw the results we decided otherwise. The samples had been split into groups and all of our herd had levels of <10 in all tests. Whereas the new girls who were generally clear, had a result of 360 for coccidia (not E. Mac that was <10). Although this is considered acceptable we felt that we did not want to risk introducing cria, who had not been previously exposed to coccidia, to these higher levels. So the three of them have had Vecoxan.
We are moving some of our herd around this afternoon. We are having such problems with our alpacas getting overweight this year (Liz Barlow did quietly mention that Explorer was far from slim!). I think that we may have to put some sheep on some on the land normally set aside for the alpacas to get it eaten down. At present we have 40 alpacas on approximately 4 acres and the rest is empty. The trouble is keeping the alpacas on small plots means lots of poo picking to keep the grazing clean.
I actually had time to enjoy some cria socialising yesterday. Both Snooty Boots and Quintos, our two youngest, are a delight: 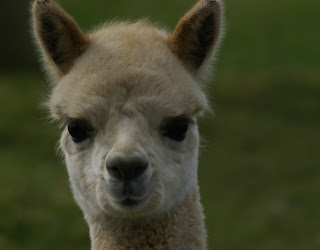 Beck Brow Snooty Boots...I wonder who her Daddy is?? 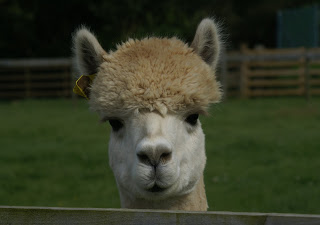 Waradene St. Patrick of EPC...proud father..it's the nose I think!
Quintos is hilarious...he struts about the paddock like he owns the place. He has absolutely no fear of anything and is amazingly friendly (he and Boots are best friends and run to greet you) 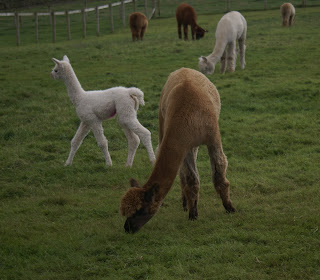 Quintos strutting his stuff (Poppet aka Paige Turner in the foreground...yes bit porky too!) 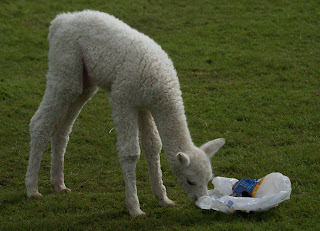 Quintos checking out the carrier bag..."I hear that she's spent all the housekeeping on some more alpacas...had to go to Aldi!) 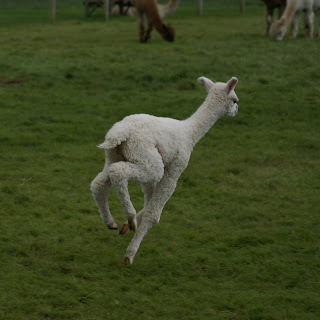