The auction girls...settled at last.

Thank you for all the compliments regarding the photos on the last blog. In answer to Judi's question we do have the benefit of a decent camera, although I do have to then crop the pixels from the high resolution version of the photos as they would take forever to up load, especially with our broadband speed. However, if Paul were to answer the question... he would say that the real reason that I manage to capture so many images of the alpacas is due to the amount of time I spend in the paddock﻿ cria watching! I swear some of them actually love being photographed... I can't help it!
Now that all the births are over for the year, it is nice just to be able to watch all the interactions. I especially love watching how first time mums behave with their cria. We have some really lovely mums this year. Lady Gaga is clearly very proud of her achievement in producing Boots, although it would be difficult for her to have an even higher opinion of herself than she already had, I think that she has just about managed it. Hoity Toity, who has the most mischevious cria ever born here (Quintos), just lets him get on with it (some mothers might be embarrased but not Hoity). Today he has been tearing aroung the paddock orgling and jumping on every female in sight (he is four weeks old). He just does his own thing then goes to his mother to be fed now and again...should have be called Delinquent!
The 'auction girls' continue to spit off. They are actually starting to look like they are relaxed and settled now. I have to say that I am not sure that alpacas are best suited to being sold via cattle markets. Apart from the obvious concerns about how they will be cared for after they have been sold, alpacas do not cope well with stress. And unfortunately (well in this case it is unfortunate) they are far too intelligent to easily forget about any trauma. Our three girls have eventually lost the 'startled rabbit' expression and now spend lots of time in the shelter with out being on high alert, but it has taken some time for them to build up some trust. I do think that it would be a shame if auction marts became a routine option for the sale of excess stock, but as many breeders want the support that is given with an individual alpaca sale, I expect this will not be the case. 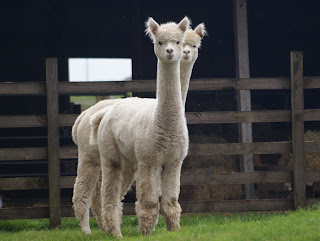 Nicola (front) and Renata...watching Velvet behind me 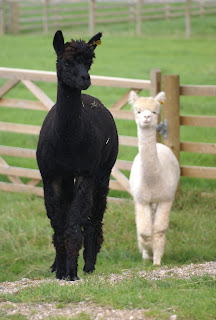 Biba (looking a little rounder on Beck Brow grass!)
Juliet and John from The Border Mill﻿ popped in to visit this morning. They are producing some fantastic products from their mini mill, and are so enthusiastic about all things fleece and fibre. Although I am going to need to use a larger mill for some of the large scale stuff, I have sent some individual fleeces for processing. I especially like the idea of wearing Lady Gaga!
Posted by Unknown at 14:52