It was with true British spirit that The World Sheep Dog Trials went ahead at the weekend. The rain was indescribable...torrential does not do it justice. On friday it was non-stop...the poor dogs could hardly hear the commands...and the Country File team (including the lovely Matt Baker) were looking more than a little soggy. By Saturday morning our marquee was under eight inches of water in places...wood chippings were sailing away with the tide. However the team, lead by Clare Savins, were amazing. Large bales of staw appeared and layers of straw were laid half a bale high in places. There was lots of interest in the alpacas, especially from the spectators who had travelled from Norway and Sweden (obviously very into sheep dogs?), who didn't seem in the least bit bothered by the Cumbrian weather. Most successful trader at the event?...the guy selling wellies...dustbins were full of discarded wellington boots...ones that obviously hadn't be tested at over ankle deep before...and were found to be wanting!
Yesterday it was a long trip to Stoneleigh to the BAS National Show Committee meeting. I travelled down with Michael from Cockerham Alpacas in Lancashire, so you can imagine the topic of conversation for the whole of the six and a half hours that we travelled together...no definitely not Strictly!
Some interesting ideas were put forward about the future of the BAS National Show, which will now go to the committee for discussion. And Di Davies got us all very excited about the alpaca show organised for the weekend after The Alpaca World Conference 2012 (14th and 15th April). With judges wearing cameras, and with large screens planted around the venue, it promises to be a great opportunity for spectators to really get involved.
I felt like I hadn't seen our alpacas all weekend, so I have enjoyed catching up on some jobs this morning. All the girls got their Maxigro selenium and colbolt drench. It was all pretty slick, I even managed to complete the task single handedly when Paul got called out to work. Lady Gaga and Hoity Toity both spat-off thankfully. After cancelling our Yorkshire Show entry because Roma had spat twice, she sat this morning. Decision now made, so I mated her again. But next week will be our cut off date for matings I think...we are going to be busy next August...whatever happened to our June birthing plan?
The cria racing season is now in full swing. Despite Quintos being the youngest cria, he is most often the one who calls the team for training. Whereas Lucie was a clear winner last year, it seem to be more of an even playing field this year, with all contenders in with a chance of passing the finish line in poll position. 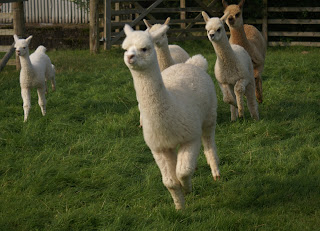 Crystal in the lead, Quintos coming up on the outside, but Alfie is looking very determined in second place. 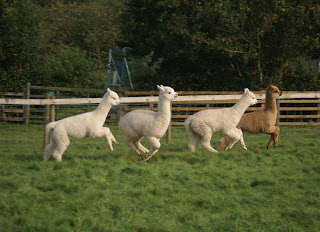 A loss of concentration and Finesse takes the poll position 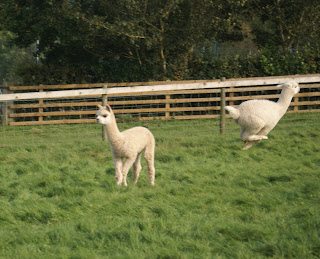 Boots seems to have lost all sense of direction...either that or she is cheating... 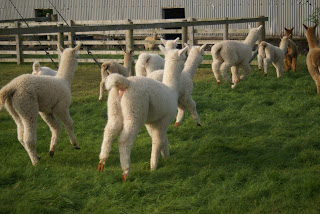 ...and they all head back to the starting pen ready for the next race... 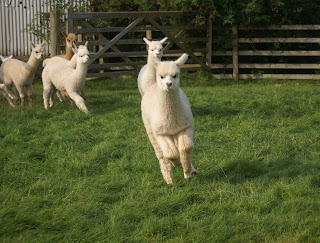 ...and off they go again...this time with Annabelle taking the lead...Rumour, in third place, is not the most competitive and rarely makes the prizes 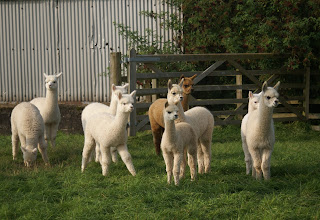 That's it...time out to watch some dog racing
Difficult to capture on camera, but I kid you not, it was a lap round the paddock then back to the catching pen, where they waited for everyone before setting off again...aren't alpacas just amazing...no wonder I am always behind with the chores!
Posted by Unknown at 16:08