Wellies is a worry.

Wellies (aka Duke of Wellington) is a worry...he most definitely isn't right...but what is wrong? I first noticed yesterday that his neck was stiff, but he had just woken up so I thought he had been lying uncomfortably. However his neck is still stiff today and so is his back right leg.

Okay so it could be an injury; Crafter can be very rough and Wellies is only 3 weeks old. So I have given him some Finadyne and also some long acting antibiotic. However, the worrying thing is his lethargy and the fact that he is slightly unsteady on his feet (although he did take a bit of catching in the paddock). I have given him injectable vitamin B1 and vitamin D. I also saw him straining at the poo pile so have given him a soapy enema. This had little effect so I will give him a phosphate enema (Fleet) which will also address any possible phosphate deficiency. The additional worry is that I have not seen him drink, but I have not been in there all of the day, and his tummy feels okay. I offered electrolytes via a bottle but he wasn't having any of it. Mucus membranes look okay (maybe slightly pale but not anaemic). Unlikely to be meningitis or septicaemia (doesn't fit was presentation) but what is going on...Worry, worry, worry.... 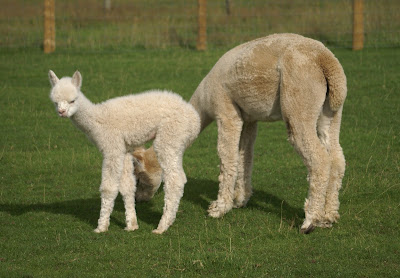 As Wellies was 3 weeks old on Saturday, it was time to mate his dam Snooty Boots (sire: Waradene St Patrick of EPC). In the hope of putting in some more colour, I had made the decision to mate her to Viracocha Black Sabbath...this was my decision...Boots on the other hand had other ideas...she started screaming at the mere sight of him...and gave me such a look of abject horror...before trying to jump out of the pen. She has been mated to Beck Brow Explorer!

Talking of unwilling dates...Paul took Cambridge Camilla (dam of Beck Brow Explorer) on the long journey for a date with EP Cambridge Navigator of Houghton (sire of Explorer). Now Camilla doesn't really do spitting...it is a bit undignified for such a lady...but I am told spitfest was the order of the day as Camilla was adamant about her refusal to be mated. At four weeks postpartum we though we had timed it perfectly. What a pain Camilla. Paul thought that he was going to create a dilemma for me if Camilla produced an Explorer mark 11 who was even better...sorry Paul...Explorer will never be going anywhere...I am training him to empty the bins and put out the rubbish...watch out!

Anyway it was good news at home, as Cambridge Scarborough delivered us a fabulous blue black female at 11 am. Weighing in at 9.5kgs she was on her feet and away in no time. With her sire being Viracocha Black Sabbath I initially named her Sunday Noir but that has evolved into Sunday Best (Sunday either way!) 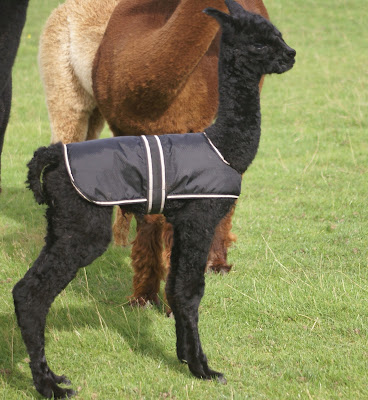 Pebbles still hasn't given birth and is 396 days today (I think that is right I have given up counting). As I have been beginning to doubt myself, I spat her off on Saturday, and she definitely spat. So she is either incredibly fat with a retained CL or she is going for the record for the longest gestation. 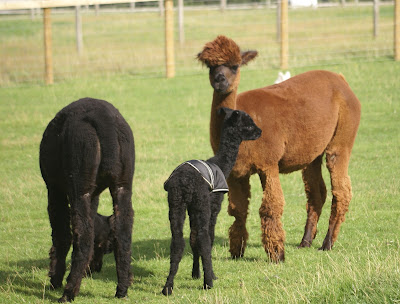 Pebbles liking the look of Sunday 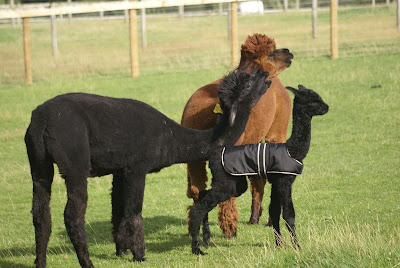 "Have your own" says Scarborough

Finally a photo of Beck Brow Hallelujah (sire: Beck Brow Explorer) who is still as white as ever. 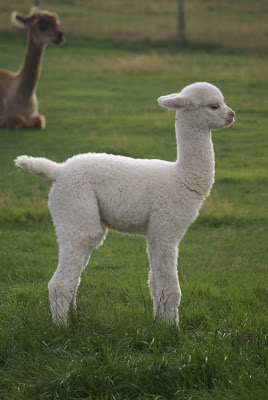