I keep thinking I have lost something...oh yes I know what it is...a great big massive weight off my shoulders...the NWAG Alpaca Championships are over!! As one of the main organisers of this new show (along with Cockerham Alpacas and Greenside Alpacas) we have had an incredible amount to think about, and felt under an enormous amount of pressure to get it right!

Set up started at 1 pm Friday and boy did we have to go some to be ready for exhibitors checking in from 5pm. Thankfully Craig had taken the day off work to help, as we really needed the afternoon manpower.  By Saturday morning we were already tired but the adrenaline (a mixture of excitement and fear) was keeping us all going. It was a very busy and a long day, and we were so grateful to have fantastic stewards who were running about all over the place including handling in the ring!. A special mention to Beverley Stewart (Lane House) who recorded all the results. We did remark that the intermediate white male class (one from the end) was the first Huacaya class that had no changes from the programme...no easy task keeping on top of results when this is the case...many many thanks Bev, and of course everyone else who all worked so hard.

Tim Hey was our judge and as always did a fantastic job; taking an apprentice judge (Joy Whitehead) through the Suri classes, as well as judging large numbers of Huacaya and progeny classes. He even supplied his own ring steward (Chris Deakin) who did a great job.

In amongst all the running around I was keen to keep an eye on what was happening in the ring. It was especially interesting for us, as this was the first show where we had clients showing Waradene St Patrick's progeny (our fawn stud male). First in were two junior brown females; Fowberry Songbird and Wiseman Sweet Coco and what fantastic results. Coco took Fourth place with great comments on fleece length and density...Songbird took 1st place and wait for this...the brown female championship!! Congratulations Jenny and Graham (Fowberry Alpacas) and Derek and Tracey (Wiseman Alpacas). 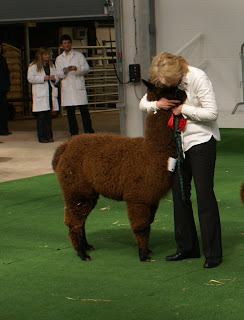 Jenny from Fowberry Alpacas; rather pleased with her beautiful Songbird 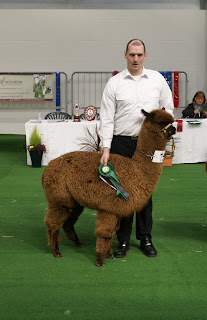 Derek from Wiseman Alpacas; he was pleased I just haven't a smiling photo!

The next St Patrick progeny in the ring was Florens Davinci who took second place in the junior fawn male class (well done Amanda) and last but not least Beck Brow Shackleton (fawn dam and sire) took fourth in a very competitive junior white male class. Well done Waradene St Patrick...Lady Gaga is due to deliver our latest St Patrick addition any day...excited! 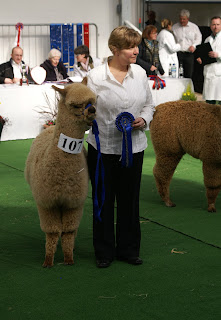 Amanda (Florens Alpacas) a keen Chelsea supporter was very pleased with her all blue look!

We had entered an all white show team....nothing like fighting at the top!...Beck Brow Explorer was placed 1st and as always was commended on his presence as well as fleece. Beck Brow Magellan and Beck Brow Quintos were in he same very competitive intermediate white male class and came 3rd (Magellan) and 5th (Quintos). We were very pleased as the competition was stiff. Interestingly the champion white male line up of two juniors, an intermediate and adult; were all Cambridge Navigator progeny (Houghton Hall Perry took it as he did at the British Alpaca Futurity...stunner!)

We have had fantastic positive feedback about the show and we have been touched by the amount of support and sponsorship we received. I owe a big thank you to hubby Paul who had to do even more running about than normal (I know Viv!) due to me having a knee injury. I have posted the Champions on Facebook, and will do my best to get the results on the BAS site today.

On Sunday it took rather a lot of effort to get out of bed, but off we went to Bev and Andy's in Yorkshire to deliver their two new additions. Hamish and Dougal settled in quickly, and were hilarious; kicking the big boys out of the shelter and putting them on guard duty. It was lovely to see Fin, Noah and Kenzie looking so well. It was interesting to see that I had made a duff call on Beck Brow Kenzie (half brother to Crystal and Lexus)...definitely a good stud quality male...now wethered!!!
Posted by Unknown at 08:55