Pass me the trowel!

I like to think that most of my decisions that I make are well thought through, extensively researched, usually evidence based even. Bad decisions can take up so much time and effort, as well as unnecessary expense. I normally try to avoid such circumstances; After all I am middle aged (at best) and have the life experience to know better.

So why have I agreed to open my garden to the public? To be judged, inspected, critiqued? No, I have no idea either, but I have agreed to be part of the Armathwaite Open Gardens weekend in July. Last year it did raise £1500 for the church so it is a worthy event. However our garden is not of show quality. We haven't put enough thought into our planting decisions. It is unimproved. It has always lacked fineness, but this year it also lacks density; So much of it's quality has been lost to the frost.

Too late to back out now. Lots of hard work has been the theme of the weekend and a very expensive trip to the garden centre. £55 for a bay tree! I had to walk past it three times before I could bare to put it in the trolley. My old tree had been around for years but minus 15 was obviously just too much for it. I tentatively plucked off a leaf this evening to put in with the boiled ham. There goes 50p I thought.

I have to say Paul has been working hard at the digging and planting but was caught having an alpaca moment this afternoon. The herd have been having a playful time today with plenty of pronking and chasing around. Paul joined them at break time (below): 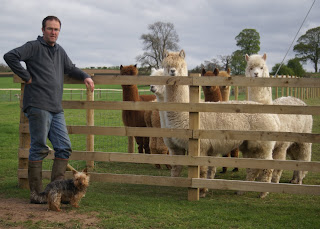 I did sneak off myself with camera in hand. I caught Sam, the alpaca cat, giving the young girls a pep talk. I think it might have been about the birds and the bees as all the girls are due to be mated soon. Sam is a stray cat who we found near to death. We fed him milk through a syringe until he was strong enough to eat. His appreciation is obvious and I believe that he really does think that he is looking after the alpacas for me as he knows how important they are. He spends most of his day watching over them. The alpacas are now used to him being around. He does however give them a smack on the nose if they overstep the boundaries! 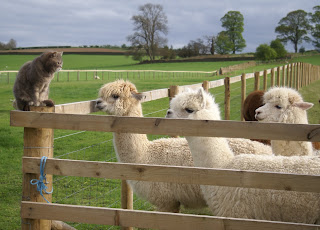 Now are you listening carefully? Sam and the young girls
Posted by Unknown at 18:27