As it was such a beautiful sunny day today I thought that I would give the girls a little treat. I spent ages trailing the hose pipe and sprinkler out in to the field, much to Paul's disgust (not sure if it was because he thinks that I am mad or he was thinking about the water meter!). Or maybe it was that I had had him come with the camera to get a shot for the blog. Anyway after all my efforts nobody was the least bit interested and this just made him tutt even more. In fact he did suggest that there was some hours going at the hospital... "obviously not enough to do".  I should have known better, our alpacas don't even appear to like the morning dew. I have been checking out of the bedroom window around 6.30 am most mornings recently and there is never an alpaca to be seen...all tucked up in the barns and shelters.
I was pleased to hear that BAS now have the 400 alpacas required to carry out the bTB blood testing project. A big thank you to all those who put animals forward as we will all benefit from this. Brain Raine (Town End) kindly gave us feedback from the welfare group's second meeting; There is hope that bTB will be back on the political agenda as both the Conservatives and the Lib Dems had the erradication of bTB within their manifestos. A group has been created to lobby the case for a reliable alpaca test. A glimmer of hope?

A couple of the girls who are getting closer to their due dates had their Lambivac injections today. The rest will wait until after shearing. I have been in contact with Ben Wheeler (our shearer) and all being well he will be with us the first week in June. I believe that there is to be a new code of conduct regarding biosecurity for shearers. Probably a bit late for this year! I am so looking forward to seeing them all naked with only their ankle socks left on.

As I didn't manage to get a water action shot that actually included an alpaca and water in the photo, I have had to make do with a photo of Hoity Toity and Pepsi Lola looking rather perky in the sunshine (see below) 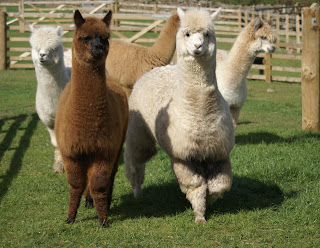