A Navigator Cria...but not plain sailing 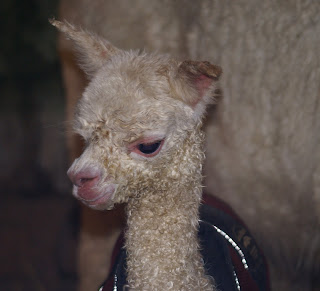 After all the deliberation over her pregnancy state we are happy to say that Camilla produced a handsome white boy yesterday afternoon (385 day gestation). Unfortunately things have been rather touch and go for him, although he has rallied through the night and things are looking more positive today. However we do still have some way to go.
I did hesitate about writing a blog but it seemed wrong not to give the little fella a positive introduction. Here he is at one hour old looking perky and rather fawn. However with Accoyo Remarque as his grand sire (dam) and EPC Navigator (GS Spartacus) as his sire, the odds were for a white cria. 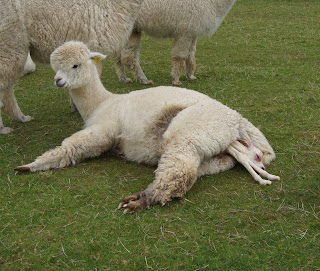 At 9kg he was a very large cria for his mum , who is a petite maiden, to deliver. Camilla had a pretty tough time. We had a head and no feet initially but we did eventually get some legs to the side of the head. We did manage to get the cria into a better position but in the end had to give her a gentle help as she was becoming so tired. A check up from the vet confirmed that she had no tears thankfully, but that she was a bit bruised. Poor Camilla.
Despite all of this it was instant love on Camilla's part. She just absolutely adored him on sight. As she had chosen a cold wet day to deliver we brought them both in (along with company) and got the little fella under a heat lamp. He was strong and we weren't especially concerned at this point, but heat is always good.
The problem has been that Camilla failed to drop her milk for the first 12-15 hours (probably due to the stress of delivery) and the little man absolutely refused to be bottle fed. In the end we had to tube feed him plasma and colostrum despite him being strong, as we were running out of time for him to acquire some IgG's.
Camilla's milk has now dropped and he does latch on to the nipple but it is difficult to be certain how much he is receiving. We still keep offering a bottle but without success (lamb's teats; baby teats; no thanks!). He has lost 0.5kg this morning, although his tummy feels full and he is passing plentiful amounts of urine. We will just keep hoping. IgG testing planned for Tuesday am (unless things deteriorate) and a plasma transfusion if results are low. 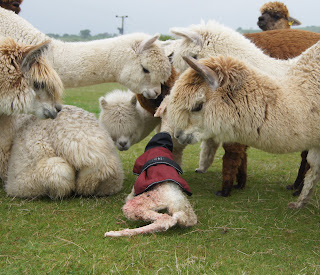 A warm welcome for the little fella. Although it was pouring with rain and rather chilly hence the coat.
Posted by Unknown at 11:14